In her comment on my last post, Goatldi asked if I would post a picture of the wood racks we have to hold wood for our two in-house stoves.  She says she battles "tree crumbs" from the wood and is trying to find a way to eliminate some of the flack caused by bringing heating wood into the house.
Because I tend to over-explain everything, I'll start with the wood box we have on our enclosed, but unheated, entry porch. 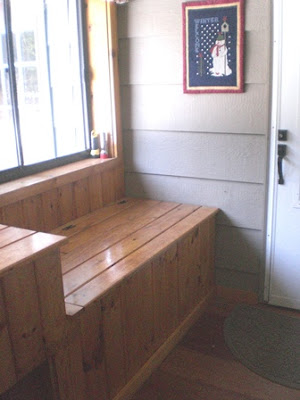 In this box/bench is where we put the wood when it's brought by wheelbarrow from one of our wood sheds.  Having the lid closed makes a really handy bench on which to sit to put on or off outside boots or shoes.  Unfortunately, during the heating months, it's rarely closed. 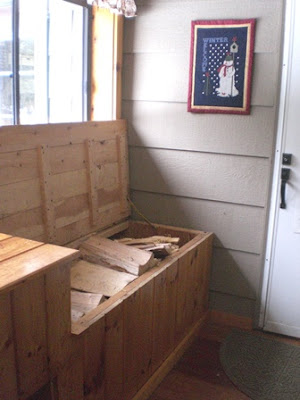 Just for efficiency and convenience's sake we usually pile enough wood in the box that it doesn't close.  Often the wood is stacked much higher than in this picture.  We take the wood from this box on the porch to the two racks inside with a heavy canvas wood bag. 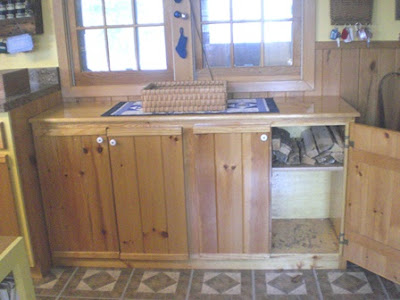 In the kitchen I designed part of a cabinet to hold both small pieces of soft wood for starting fires and the bigger chunks of hardwood for longer burning.  The above shows the top section with some small wood in it and the lower part empty and ready to be filled. 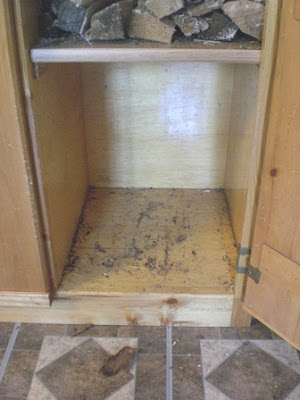 Gotta say there's not a whole lot of flack left in the bottom when all the wood has been used.  Before refilling I usually brush out what is in there right onto the floor and it gets picked up when I sweep the kitchen each morning. 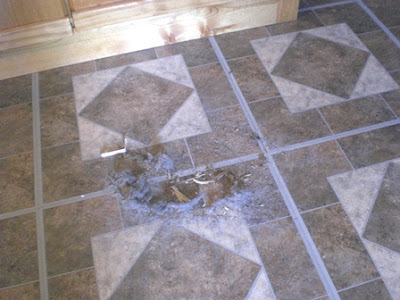 I don't have as much "tree crumbs" as I do those awful, gray dust bunnies.  I don't know where they come from but they must be part of burning with wood as I don't have them in the summer time even though we're in and out with outside shoes on many times a day.  One would think we'd track in more dirt then than in the winter. 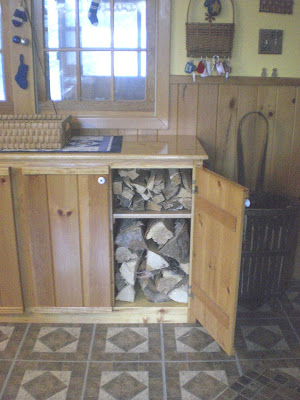 When the wood is all restocked in the kitchen, 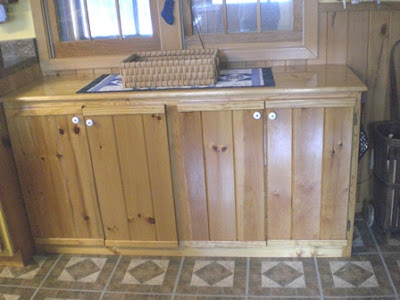 I close the door and the wood supply doesn't show. 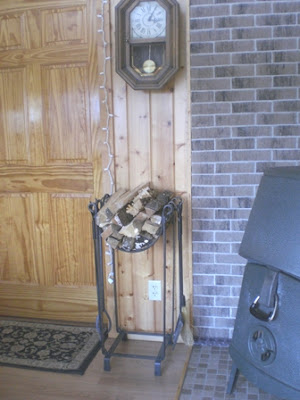 This is the wood rack in the living room.  The top section is filled with the smaller soft wood and the bottom area holds the larger pieces of hard wood. 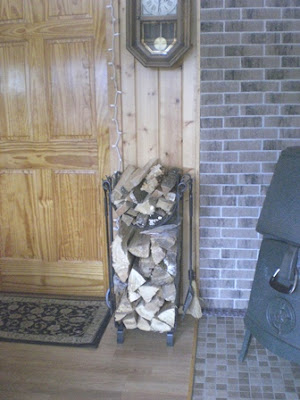 Above is the filled rack. 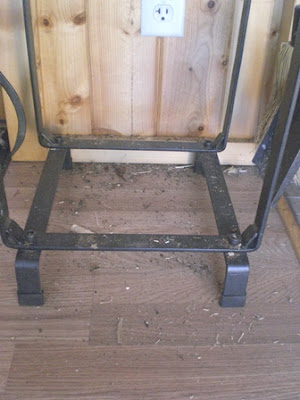 As you can see from this picture of the empty rack, the flack from the wood used falls right on the floor beneath the rack and isn't as easily brushed up, but we do it each time we refill the rack even if it's only a partial filling.
We simply use the kitchen floor broom and dust pan to collect the debris.  We do the same in the area under the living room stove and the one in the kitchen as there's usually some flack there.
As usual, I've probably rattled on more than necessary and certainly have included more pictures than anyone might desire.  Hope this gives you, Goatldi, an idea of how we do it here and perhaps it will provide you an idea to implement in your own house.
Posted by Mama Pea at 3/02/2021

Heh; I read "flack" to mean human complaining about the mess! Anyway, you OBVIOUSLY have much cleaner firewood than we do. My floors would be indistinguishable from the forest floor if I implemented your system, and I would worry about bringing in termites or something. We bring a load of firewood to the front door in a wheelbarrow, then carry wood in to put directly in the firebox with a closed canvas bag. Even then I think I get more debris than you!

What a great organizational system!

Michelle - Oh, yeah, you mean to give somebody "flack!" Gotcha. That definition didn't occur to me. :o\ Isn't it interesting to hear how others handle much the same chore!? Anybody else wanna speak up?

I also have an unheated porch where I stack 'emergency' wood, although nowhere near as tidy as yours. The emergencies covered are illness, blizzards, and just being too bone-idle to go out and bring in a load of wood. The rack by the stove is about the same size as yours and I also have a rectangular basket that I stack for the coldest days. Nothing I do cuts down on the wood flack. :(

All comments and post very interesting. But lead to more questions. What varieties of wood do you burn? How long is it dried?
How hot do you burn?

Yes I am full of questions. But as you know all wood is not created equal. Nice informative post!

I use plastic boxes/crates to carry and hold my wood. We have 4 fireplaces, a stove for cooking, a big heat reserving fireplace, a small stove/fireplace and sauna. During cold weather I use three of them daily, in really cold weather I might heat all of them in same day. Usually I heat either sauna or our big fireplace. The big fireplace loads one cratefull of wood at once, sauna uses about 3/4 of a crate and smaller fireplaces uses only few woods at time.
With all that it is easier for me to have those plastic boxes/crates to carry and to hold wood. I would love to have a metal container for downstairs small fireplace, it would look much better than plastic ones. Most crumbs will stay in crates. I used to have a huge basket made out of shingles, but it leaked crumbs �� and it was difficult for me to carry, because I'm short and therefore I have short arms.

I know they say that heating with wood warms you twice (cutting it and burning it) but it seems that it may warm you thrice! There's all the hauling in, stacking, etc. And let's not forget the cleaning-up-after. I love the bench/box.

That bench/box is beautiful. You must have perfectly sized wood pieces to fit in there. What do you do with the gnarly ones? Your wood storage areas are all neat and tidy! I totally agree on the grey dust bunnies. Where do they come from? I fight them all winter. I love that very apt term, 'tree crumbs'.

Very methodical. We don't have such a neat system. We carry the wood in by canvas tote and dump it near the wood stove. All the kindling and small bits are tossed into 5 gallon buckets. As far as sweeping up, we wait until we no longer use the wood stove or the pile of wood ash gets too deep. As far as dust bunnies go, they multiply like rabbits, don't they!

It is very well done

Very tidy system. I could live with that. Love stuff that can be cleaned up with a good old fashioned broom. Although, I generally finish it up with my cordless hand vac instead of a dust pan. Dust pans frustrate me

tpals - Like you, we also have that "emergency" stack of wood. It's a large rack on the little step-up porch stoop right outside our enclosed porch. I guess we're fortunate in that we've never had to use it in an "emergency!" Matter of fact, Papa Pea said we needed to use it last year before the wood went totally punky as it had been there for so long. We did use it, but then filled the rack with new wood!

Goatldi - Our hard wood is birch and maple. The soft wood we split into smaller chunks for starting fires is poplar. We try to have two years of wood under cover and seasoning (drying) so what we burn is always at least a year old. Not sure what you mean when you ask how hot we burn. Our house stoves are easy to regulate so we set them to keep our inside temp right around 70° or just below. Higher is too warm for us. Any and all questions are welcome!

Ulvmor - Yikes, you have more stoves to feed than we do! (Also have one in the heated part of our attached garage.) Sounds as though you have a good system that works for you.

Susan - Oh, I can vouch for it heating us more than twice! Or even thrice! It's ridiculous how many times you have to handle each individual piece of wood! After filling wood racks each day (sometimes more than once), I always say I've had my weight bearing exercise for the day.

Rosalea - No our pieces of wood truly don't fit in our wood box very well. And the stacks within (and piled over!) the box are often not neat at all. The knobby, gnarly pieces give me the most hassle when trying to fit them into our kitchen wood box/rack!

Cockeyed Jo - I'm finding this really interesting how we all handle our wood situation! Just goes to show what works for one person, doesn't necessarily work for the other. And vice versa!

Catherine - Thank you! It's worked out to be the best system for us. So far, anyway!

SmartAlex - Ya know, I bought a cordless hand vac for that very purpose but it did nothing but frustrate me. Either I got a defective one (very little suction and didn't hold a charge) or it was one of the first ones made and I should try one again. They must be better now.

I have a Black & Decker that I couldn't live without. I think a lot depends on the age of the battery when you buy it and that is the luck of the draw. I bought one for work and that thing was a lemon right out of the box. Couldn't hold a charge. But I've had three or four others of the same model at home and they've been awesome. A good one will hold its charge for me for 6 to 8 weeks of normal use. They say each battery is good for 600 recharges and of course, they usually die right after the warranty runs out. I've had them last as long as five years. When I can feel it starting to fade I just order another one.

Wow, very neat! And I guess I mean that in more ways than one. I'm glad Goatldi asked the question! I always love seeing others' solutions to common "problems." If my tree crumbs are large enough (i.e. not dust) then I sweep them up and pop them into an empty paper flour bag for fire starter.