Catching Up After Being MIA

First of all, thank you for the inquiries and concern as to my absence in making replies to the comments on my last post, the lack of getting up a new post, the drought in our area and our safety in regard to the fires in the area.
We've never been in danger from the forest fires, but have been impacted by lots of hazy, smoke-filled days.  Papa Pea's sensitive eyes have made him uncomfortable dealing with an irritating, burning sensation because of the smoke.  Strangely enough, we've also felt a wee bit out of sorts, tired and clumsy (or have we always been this way?) which our daughter recently suggested might be attributed to breathing the poor air quality for weeks.
The two closest, biggest fires are slowly moving toward the goal of being under control although it's still an iffy, scary situation.  The larger of the two now has burned more than 26,000 acres and is said to be 37% contained.  We've heard the embers won't be totally extinguished until snowfall.  The other area still burning covers upwards of 15,000 acres.
Any discomfort of ours pertaining to the fires doesn't begin to measure up to the people who have had to evacuate and/or have lost property.  And so much admiration should be given to the fire fighters on the ground and in the air who have been in the midst of it all for over two weeks now.
Last weekend over a 12-hour period we got 2-1/2" of rain.  It certainly helped control of the fires and also all growing things in our area benefited from it.  Our day time temps have moderated a bit and nights are cool enough to being able to sleep without lots of wakeful tossing and turning.  But since the weekend rains, we've had dry weather.  Grasses in yards and along roadsides are still yellow and dead looking and the fall coloring of the trees seems to be coming on earlier than usual.
Although we've had a good summer (considering), I'm ready for it to end and am looking forward to a peaceful winter with less activity out and about on our little homestead.  And yet I've always found it difficult to transition from one season to another.  Doesn't matter which season I'm leaving or which one I'm entering, it takes a period of time before I feel "adjusted."  Anyone else experience  this?
Posted by Mama Pea at 8/31/2021 12 comments:

In the very early hours of this past Saturday morning, we had a brief thunderstorm roll through our area, and then a couple of hours later some more rain fell.  Our rain gauge showed 3/10ths of an inch.  Not nearly as much as we could have used but welcomed all the same.
There are two forest fires burning in separate areas, both approximately 50 miles from us as the crow flies.  The one that has been burning longest is, as far as I know, still uncontained and has burned 10,000 acres.  The smaller fire that started a couple of days ago covers only 50 acres and is said to be controlled.
Both fires were started by lightning strikes.  The fires are being fought both on the ground and by air.  Our temperatures have dropped a bit but we're still having strong winds that are hampering efforts of the fire fighters.
The past two nights, our temperature has dropped as low as the 60s and last night we went down into the 50s.  A very much appreciated relief from the too warm nights we've had most of this summer. 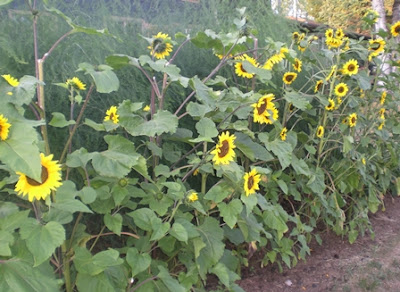 To share a bit on the more upbeat side, the Lemon Sunflowers (a new to me variety this year) I planted in front of our southern most asparagus row are a delight to behold. 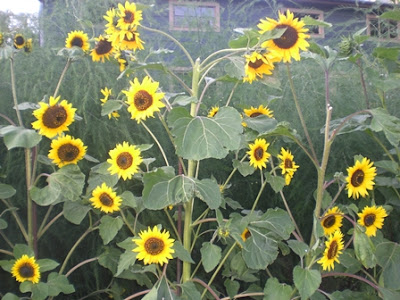 We've enjoyed them so much for several weeks now. 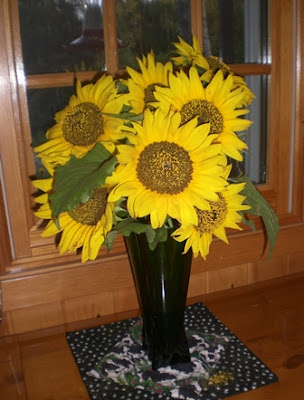 And they've given us beautiful long-lasting bouquets for nearly every room of the house. 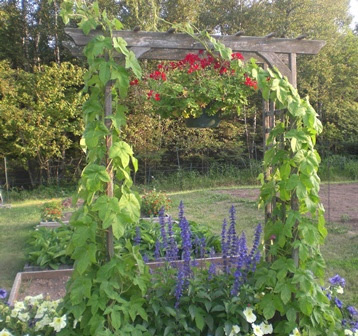 The Morning Glories planted on either side of this trellis have finally reached the top, but the bloomin' vines have yet to show one single bloomin' flower.  (Patience, Mama Pea, patience.)
You can see the south tree line over the garden trellis and, yes, the leaves are already starting to show tinges of brown and yellow.  A little early for the natural turning of the colors.  I'm assuming it's because the trees are suffering from the drought, and just hope they won't have permanent damage.  There's possible rain in the forecast later on in this coming week.  We sure hope the "possible" comes to pass.
Posted by Mama Pea at 8/22/2021 9 comments:

Garden, Silkies and (Sigh) No Rain

It may seem early, but I'm starting to clear some garden beds and get them ready for winter.  I blame it on not putting in as large a garden this year and being tired of the very hot summer weather we're struggling through.  Some of the plants are showing signs of struggling, too, so I'm just not going to fight it.
We all are familiar with the song that starts "The hills are alive . . . "  Well, the plants are alive . . . with grasshoppers.  Great, big, healthy grasshoppers.  And they are hungry.  If they had invaded when the plants were small, I'm sure they would have destroyed them all.  So I'm grateful the giant jumpers have waited to make an appearance until this late in the season.  I'm sure they're a sign of the drought.
And drought conditions we are still having.  Our local weather report daily states we are having "near critical fire conditions."  No rain is in the forecast for the near future.  Periodically they will say there is a slight chance of precipitation, but it just doesn't materialize. 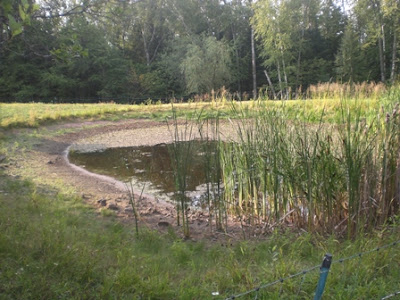 I almost hate to show this picture of our pond.  As you can see by this one end of it, the water level is down about 4' and it's turning into such a sad looking puddle.  It's not spring fed but rather gets water from the run-off of high ground to the north of us.  No rain equals no run-off this summer.
We've never had much luck enticing any of the breeds of full-sized chickens we've had into being good setters and hatching our replacement chicks.  The bantam breeds haven't (so far) been as inbred and still have some of the old-fashioned characteristics of going broody so this spring we ordered a few Silkie Bantams in the hope they would do the job for us. 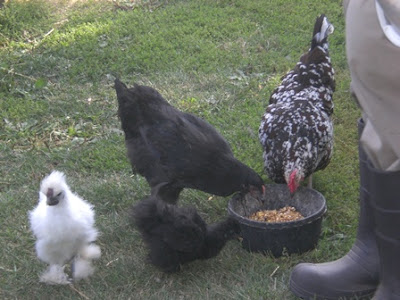 We've never had this variety of bantams before and they certainly are strange looking little creatures.  Above are two of them, nearly full grown now, along with a couple of teenage full-sized birds. 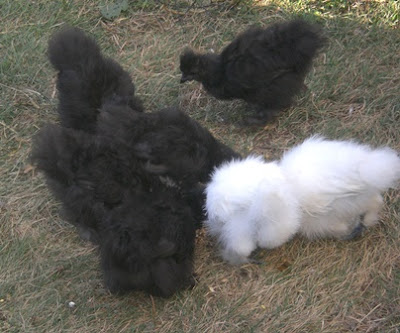 They don't have feathers as much as fuzz or fur.  They're as soft as they look and are very friendly.  Here they're clustered around some whole grain treats scattered on the ground.  From the back they look like large, moving pom-poms. 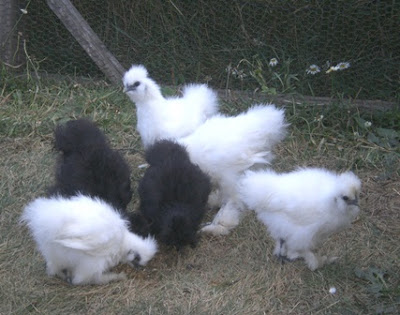 We have half white ones and half black ones.  They aren't touted as great egg layers (they may lay somewhere around 100 eggs a year), but we aren't really concerned about that because we have laying hens that keep us supplied in a good quantity of eggs.
If all goes as planned, these little fuzzies will earn their keep hatching out new chicks for us.  Plus, I think they'll be a fun addition to our flock.
Posted by Mama Pea at 8/17/2021 18 comments:

It's All A Blur

These days I don't know which end I'm sitting on.  Not that I'm spending much time sitting.  So maybe it's a good thing.  (Happy Birthday, Martha.  Eighty years old.  Wow.)
We're still very much working toward our goal of reorganizing and purging all storage areas.  You'd think we would learn, but we continue to look at a specific area and think that with the two of us working on it, it should be done in two days.  Two weeks later . . .
Our solar energy guy came by yesterday to determine what could be done to get our system up and running again after we suspected it might have been damaged by an electrical zap (possibly an indirect strike of lightning) during the storm the last week in July.  Blast and dang, suspicions confirmed.  The controls that enable the panels to follow the sun were damaged, but the more serious issue is that our converter was fried.  It's done, gone, kaputz.  We're very fortunate we still have the ability to run off the grid until we can get back on solar.
The fire danger in our area continues to be very high because of our severe lack of moisture.  Although the temperature climbs into the 80s every day, the sky remains hazy with smoke drifting down from Canada.  Most days the smell of the smoke permeates the air, and I think we're all suffering a bit from the continued unhealthy atmosphere. 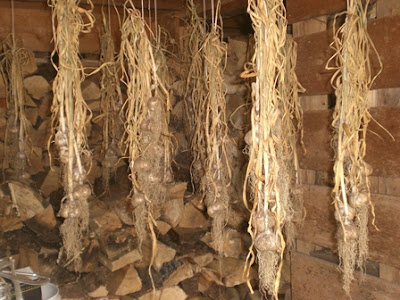 I harvested my garlic a couple of weeks ago (eighty-eight bulbs), and it's hanging in an empty corner of a wood shed to cure. 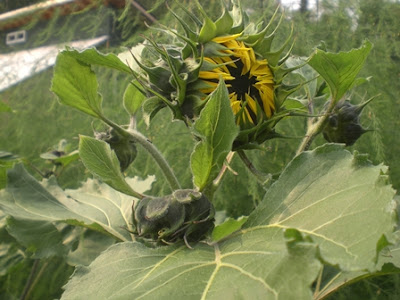 The sunflowers are blooming like crazy but many of them have several small heads at the top of the plant rather than one larger one you would normally see.  Messy, huh?  Quite a few of my flowers seem to be doing weird things this year. 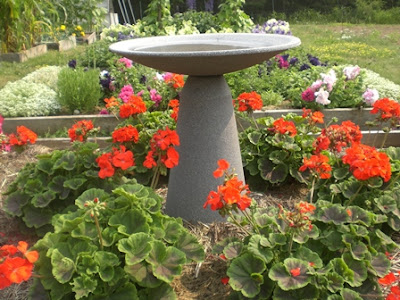 The geraniums planted around the bird bath look good, but are orange in color (I hate orange geraniums) rather than the dark red ones indicated on the tag when I purchased the starts. 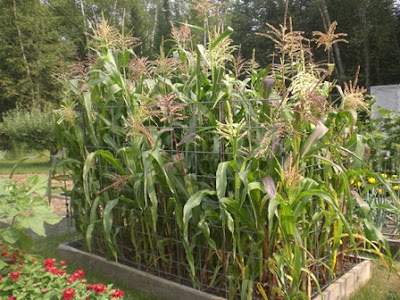 The portion of our little plot of corn that got blown over in the previously mentioned storm has almost righted itself.  Amazing.  Small ears are starting to form on the stalks. 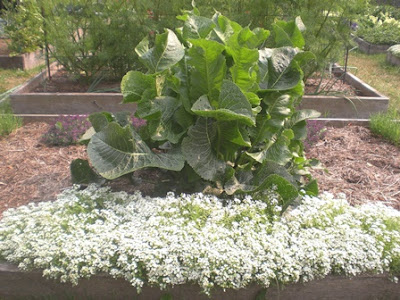 The horseradish root I planted this year is growing beautifully.  I can start harvesting it next year.  Must learn how to make homemade horseradish.  My grandpa always made his own but no recipe (he probably didn't have one) was handed down through the family. 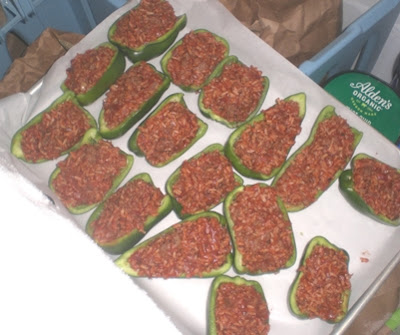 About an hour ago, I put a second batch of stuffed green peppers in the freezer.  The peppers seem to be early this year, and we're glad to have them.
Busy, busy days and in the blink of an eye, this new month of August will be over.  Here's hoping you're all staying healthy and positive while learning to navigate these crazy times we've all found ourselves in.
Posted by Mama Pea at 8/04/2021 19 comments: