This is another quote from a book by Matt Haig I've been reading.  The title is The Comfort Book.
Stuff
You don't always have to do stuff.
Or achieve stuff.
You don't have to spend
your free time productively.
You don't have to be doing Tai Chi
and DIY and bread-making.
Sometimes you can just be and
feel things and get through
and eat chips and survive,
and that is more than enough.
He had me at "eat chips."
Posted by Mama Pea at 3/28/2022 11 comments: 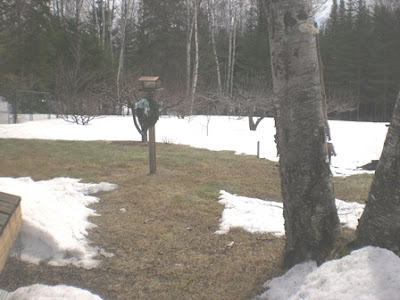 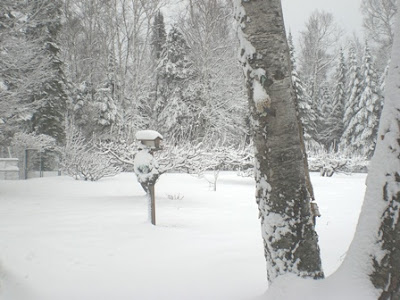 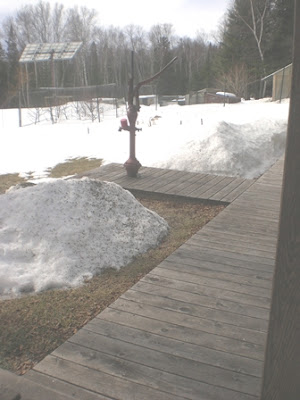 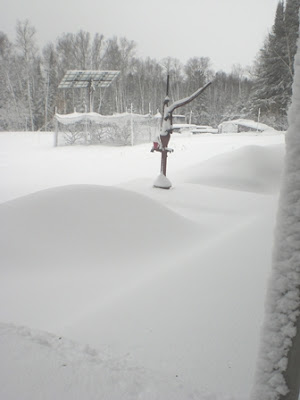 After the Storm
Could have been a lot worse.  Most of our March snows melt quickly, but looks as though we're heading into a week of winter-like temps so spring time seems to have left the north woods.  At least for a little while.
Posted by Mama Pea at 3/24/2022 16 comments:

March: The Most Schizophrenic Month

Last week we had a real taste of spring time.  Daytime temps soared up into the 40s (stop laughing), we had sunny days and it was amazing how much of our snow melted.
We had a large puddle of water growing in the middle of our pond.  More than half of our driveway was down to the gravel.  Several of my raised garden beds were free of snow and a lot of (nearly) green grass could be seen on our lawn area.
Then this past weekend the weather reports started warning of a big snow and ice storm headed our way.  Very early this morning (Tuesday) around 1 a.m. the storm was to start.  Nope, a change was issued.  It wasn't going to start until 4 a.m.  No evidence of any precipitation then either.
After dawn, we had a little freezing drizzle and a couple of snowflakes around breakfast time.  At noon it did start to snow.  Lightly.  We've seen a couple of periods of heavier snowfall on and off now for most of the afternoon and early evening.
Around 6 p.m. I went out on our deck with shovel to see how much accumulation we had.
Oops, the shovel would take off only the top layer of a couple of inches.  It was all icy crystals underneath.
Our daughter stopped on her way home to report the roads were extremely slippery.  She drove with her 4-wheel drive engaged, but even so went slightly diagonally at times.  Yep, a good night to be home warm and safe.
The current forecast is for the snow (or ice or sleet or possibly rain) to continue until tomorrow afternoon.
Even so, the snow now falling will have to have a real burst of energy in order to drop the 16-18" they are saying we may get.
March.  It's such an exciting, depressing, confusing month.  According to the calendar, spring may have arrived but in Minnesota the month doesn't know it.
As Garrison Keillor, a well-known Minnesotan, is quoted as having said:
March is the month
God created to show people
who don't drink
what a hangover is like.
Posted by Mama Pea at 3/22/2022 10 comments:

Wolves in the Middle of the Night 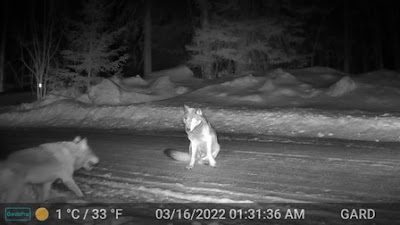 "I've been waiting and you're late." 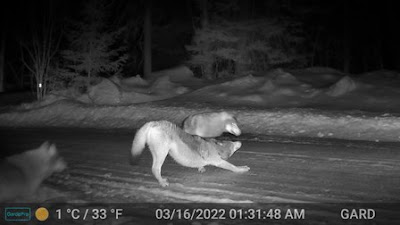 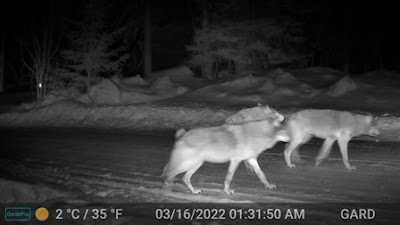 Because we got such a large amount of snow this winter, I really didn't expect we'd see bare ground until sometime in May.  (Or possibly June.  Maybe July?)  But this last week of off and on sunshine and temperatures up into the 40s has made for a lot of slow and easy melting.  A few puddles here and there but no run-off causing flooding.  (At least not yet.)
Yesterday we went from periods of bright sunlight that required sunglasses when outside to very shady overcast periods.  Back and forth this went on all day, but even when the sun was hiding from us the snow was still melting. 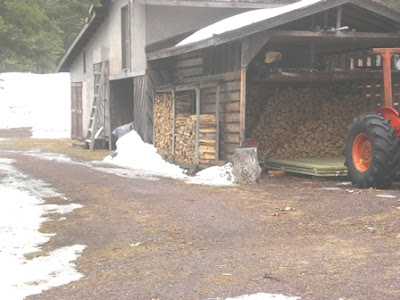 Lots of gravel showing on the drive back past the big wood shed.  And no standing water to freeze over night and make a treacherous skating rink. 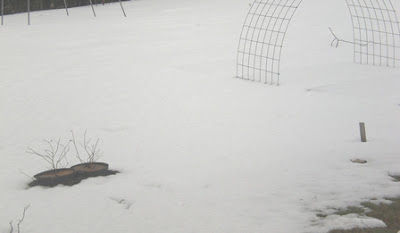 Above are two new blueberry bushes (to the left) we got late last season and healed in until this spring.  The big black pots and the bushes in them were totally covered with snow until this thaw began.  If you look closely, in front of the hoop trellis, you can see one teeny-tiny corner of one of my raised beds starting to peek out from under the snow. 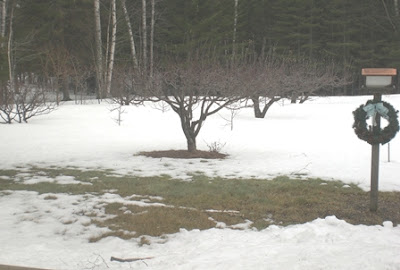 And look here.  Green grass actually showing near the orchard! 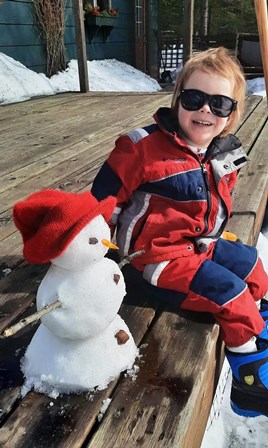 Our daughter and her little charge came for a visit yesterday and they played outside for a long time.  What a cute little snowman they built during a period of sunshine.
I know we can still get plenty of snow during the last half of March and well into April, but what a breath of spring time to see all the melting this past week.
Posted by Mama Pea at 3/18/2022 6 comments:

The Importance of Being Kind

I believe that being kind to others is one of the most important personal traits we need to practice today in our daily lives.
Being kind means being supportive but non-judgmental.
The old saying that it's not fair to judge a person until we've walked in their shoes proves to be very true in many cases.
There are times we simply don't know what the other person is trying to handle in their life during a given period.
We may not be aware of what physical, mental or emotional problems someone else is struggling with.
Even a good friend or family member might chose to not share a serious problem or dilemma.
Practice being kind.
It's important.
Your kindness may be what is needed to help someone get through the day.
Posted by Mama Pea at 3/13/2022 11 comments:

Last gardening season was not a great one for my onions.  I can't help but place the blame on our spring/summer/fall seasons of drought.  Feeling very thankful for our ample well water supply, and even though I spent many hours watering the whole garden, the onions just didn't grow as well as they usually do.
The quantity was about the same as any other year, but the bulbs of both the red and yellow onions were stunted.
We keep our onions in milk crates on the basement floor where the temperature stays a consistent 52° (or very close to it) all winter long.  This seems perfect for the onions.
This morning I went down into the basement to refill the container I keep in a closet in what we call our "entry room."  (A place for outside clothes, boots, spare refrigerator, broom closet, etc.) 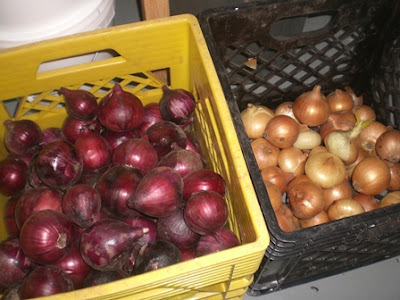 Our onion supply isn't going to make it until this coming year's harvest.  The reds still fill about half a crate (they did the best of the two varieties) while the yellow ones fill only about one-quarter of theirs.
The good news is that they're all keeping well.  I found only one that was soft, a red one, and only one that had started to sprout, a smallish one you may be able to pick out in with the yellow ones.
All in all, we're appreciative of the number and size (sigh) of those we did harvest last year considering the growing conditions, but I'll be ready and eagerly awaiting the new crop of 2022, you may be sure.
Posted by Mama Pea at 3/06/2022 16 comments:

We're capturing many pictures of the deer, wolves and foxes on our trail camera. 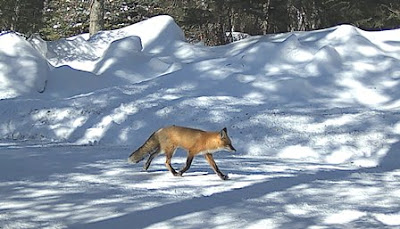 They all look healthy, well fed and in good shape.  The camera shows there are many foxes in our area but we've yet to spot one in person this winter.  Rabbits are supposedly a main part of a fox's diet and although we do see tracks of rabbits in the woods, they, too, haven't been showing themselves to our human eyes.
Squirrels have multitudinous tunnels in the high snow piles on the south side of our house where the sunflower seed feeders are for the birds.  I wonder how they can see way down there under the snow?
The snow is getting so deep that the deer will soon be more prone to being stalked and taken down by the wolves who are able stay on top of the snow more easily than the sharp-hoofed deer.  'Tis the way of nature.
Posted by Mama Pea at 3/01/2022 10 comments: