Due to my unforeseen "out of commission" period, parts of my garden didn't get planted this year. 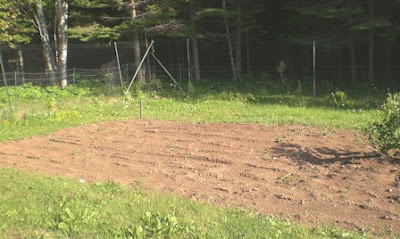 I was going to plant the small pie pumpkins here. 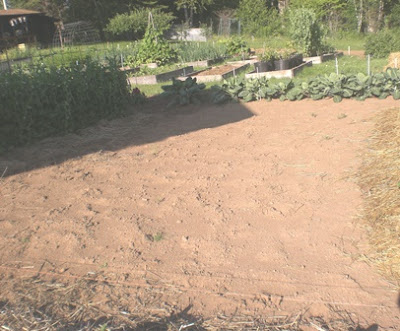 And the large jack-o-lantern pumpkins would have gone here. 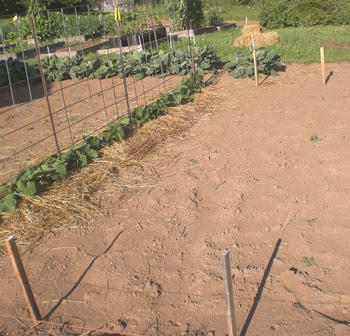 Two rows of sunflowers were meant to be growing in this space.  Oh, how I am going to miss all those cheerful sunflower bouquets!
Okay, after viewing those dismal bare spots in the garden, here are some other areas that did get planted, but will be changed next year. 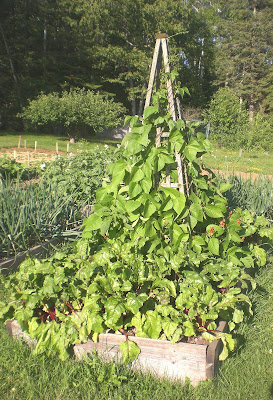 I put the tepee trellis in the middle of this raised bed with Scarlet Runner Beans around the base and climbing up it.  On both ends of the bed are beets.  Everything is growing well, but I think it has a look of being too crowded with those two particular vegetables growing together. 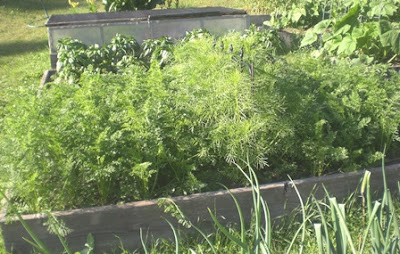 The carrots and cosmos flowers . . . oh, my!  Whose idea was this?  Too much greenery that all looks the same.  Bet you can't even tell the cosmos from the carrots.  Being late, of course, the cosmos are yet to bloom. 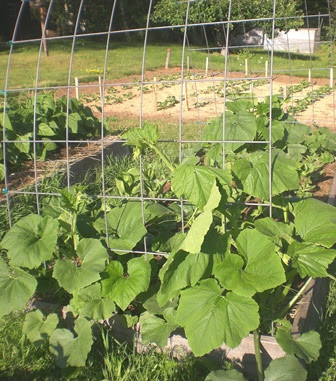 Even though I won't have pumpkins for fall decorations, I did get small colored gourd seeds stuck in the ground at each end of the hoop trellis.  With luck, they'll climb up and over the hoop.  Maybe too late planted, but at least I got them in.  Will they make it to maturity?  Don't know.  There are zinnias planted from seed in the middle of the bed.  They're going to be late, too. 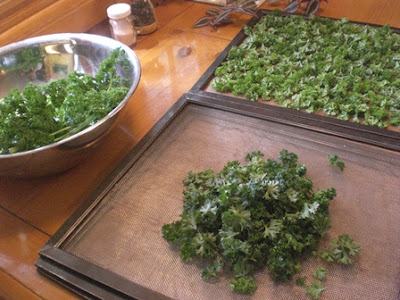 On the bright(er) side, I've already taken two cuttings of parsley to dry for our winter's supply.  Good ol' parsley.  Reliable stuff. 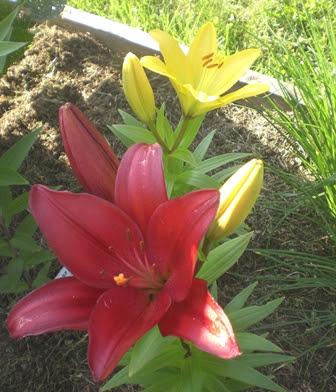 At my daughter's suggestion, I planted bulbs for Asiatic Lilies.  (I would normally have more flowers interspersed throughout the vegetables in the garden to add lots of color.)  The lilies are just now blooming, and I'm so happy with the color they've added this year.
Posted by Mama Pea at 7/30/2022

Oh my; look at that beautifully prepared soil! I think if someone had prepped my garden space that well (or at ALL; ahem), I would have crawled out there on my hands and knees to poke seeds in it!

For everything that didn't get planted, a lot did! Seems like I always run out of planting season before I run out of seeds.

Despite lack of planting, your garden looks great. Rabbits ate down every single one of our carrots this year. They are horrible this garden season.

Michelle - For us gardeners, I don't think there's anything more enticing than a nice area all prepared to accept seeds or transplants. Makes one think the possibilities are endless!

Kristina - It's not the wabbits, but the deer that would decimate our garden if we didn't have it all fenced in. About the only little varmints we have to worry about are squirrels and chipmunks and they don't do much damage. So far.

Does your parsley overwinter? I love your lilies! We usually plant flowers around the garden area also, but sadly, we just never got that far this summer! I do have my seed saved for next year, however! Get a great week!

wyomingheart - No, sadly, I've never been able to convince my parsley to overwinter. Have piled great mounds of straw mulch over it, but no go.

The things you did get planted look beautiful, and those lilies...WOW! Will you be planting a cover crop in the bare areas?

Rosalea - That's something we SHOULD do, for sure, but things have been so crazy around here that we haven't even discussed it. Bad, land stewards, bad! :o( This week an unexpected trip to the Big City we hadn't planned on coming up. Those days 'bout wreck us for the whole day . . . and the day after returning home! (Where's my bottle of Geritol?)

We have an unplanted area too, but its a weedy tangle. I had started to work on it when Covid got me. The nice thing about gardens is that there's always next year. The rest of your gardens are lovely.

Granny Sue - Thank you very much! And you are right. I've already made lots of notes of what I want to do next gardening season and have even started to make the different area layouts on graph paper!

At least it's nice and green! It's been in the 100s here and while our garden is doing well it's been water water

Nancy - Good for you for keeping your garden going in those ungodly temperatures. That isn't easy and requires a lot more work than usual!