First Snow - But Not Impressive

Sunday morning we had quite the snowstorm for a short period of time.  It was the first snow that stayed on the ground this season.  At least it stayed for a few hours.  By afternoon, the sun came out and melted most of it. 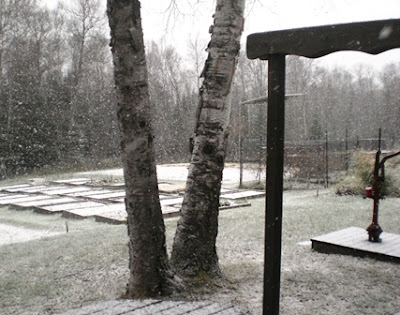 There's something about the first snow that is exciting.  (Above shows the start of the snowing.) 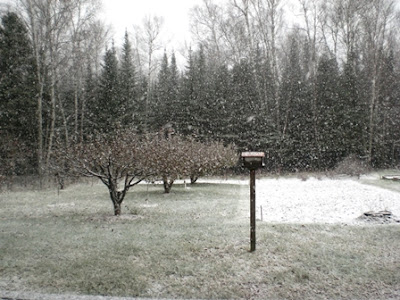 The wind picked up and started to really blow.  (Picture taken before strong winds blew.)  We watched as it literally tore the leaves off the apple trees.  Those trees usually hold on to their leaves almost until the new buds push them off in the spring. 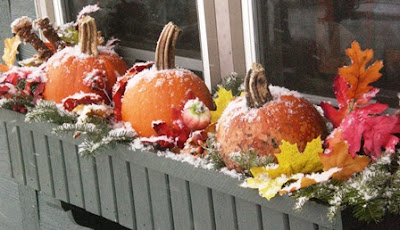 Only a week now until I change the decorations in the window boxes from fall to Christmas/winter.
Our temperature yesterday morning was 16° which is the coldest we've had since last winter.  I wanted to go to town to pick up the last few ingredients I needed for Thanksgiving so bundled up and headed out.

I made it only about half way out our driveway when I came upon the blockage of the second tree in about a week's time that's been blown over by the wind.  You can see the stump where it broke off to the right of the drive.
Although it's hard to see, there's a second bare poplar tree a bit farther down the drive that is also lying across the driveway.
I backed up until I could turn around and gave Papa Pea the news that he had some wood work to do.  This is getting to be a regular thing.
The day didn't warm up much at all.  I think our high for the day was 20°.  If we hadn't had that sun on the snow, I think we would have kept it as a first layer of what's to come this winter.
Posted by Mama Pea at 11/23/2021

We actually got our first snow this morning! Then turn to rain sadly but it was pretty while it lasted. Well one thing about trees falling at least you get some free firewood! Can a bummer though oh, your window box looks so cute! We had one that we used to do like that I'd add seasonal stuff but then we had to have a new air conditioner installed and it was just too hot for any flowers to grow there. Happy Thanksgiving!

We got snow yesterday and last night. It has stuck around today - quite a bit, actually. But the temperature is going to go up enough in the next day or so that I imagine we'll lose most of it. I am not sad about that. Wow, that's a big obstacle in the road!! More to add to the firewood. -Jenn

Beautiful new header, and that window box dusted with snow is just gorgeous. Yes, the first real snowfall is exciting, wish it would hurry up over in these parts! Happy Thanksgiving!

Lovely shot of the window box! Looked like something from a magazine. You are so right. First snows are exciting. I love a good size snow storm. I want exactly one each winter.

Nancy - Our temp went up to the low 40s today but has started to drop this afternoon. Down into the 20s tonight and then "precipitation" tomorrow . . . whatever that turns out to be!

Jenn - Yep, the firewood has been falling all around us! Hope your snow does melt so you don't have to chance slip-sliding around what with your current back problem! Take care.

Rosalea - My new header photo is one my daughter took. Isn't it pretty? You and are are snow lovers, but lots of folks aren't. I want it as insulation for the bare ground . . . and the wintery scene it creates on our landscape.

Retired Knitter - Thank you so much! I'll talk with Mother Nature and see what she can do to deliver your one snow storm this year! ;o)