At Least We Didn't Have Company Coming

This afternoon I was in the process of making Barbequed Country Ribs for dinner tonight.
After taking the pan of ribs I had just pre-roasted out of the oven, I was starting to add the BBQ sauce I had simmered on the stove top. 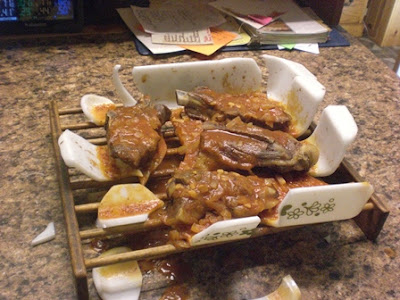 About half the sauce had been poured over the ribs when, POP!  Some pieces of the Pyrex dish went skittering across the counter, some landed on the kitchen floor.
No worries, I didn't get any of the hot sauce splattered on me or wasn't cut by any of the glass shards.
I sure do feel bad about that 9" x 9" dish I've had since we were first married though.  Maybe that was the problem.  It had just plumb wore itself out with all the casseroles, brownies, crisps, ginger breads and a sundry of other things I've made in it.
We had egg sandwiches for dinner.
Posted by Mama Pea at 9/17/2021

Happened to me once as well. What a disapointment in our future meal! What a waste to throw it all away... but it has to be done when there are shards of glass involved.

DFW - I picked up so many tiny, tiny shards of glass as I was cleaning up the mess I had absolutely no desire to try to salvage those meaty ribs! Who needs needle sharp shards of glass cruising through their digestive system? :o\

Well done good and faithful servant casserole dish! You'll probably be finding tiny shards for a while! So sad to lose something so valued but so taken for granted.

Michelle - I may have said something other than "yikes."

Anonymous - When I was mopping up the sauce left on the counter, I was surprised to find so many tiny slivers of the casserole dish in that mess. I guess I should be thankful most of the dish was the big chunks!

What a shame, but way better to be safe than sorry! Sometimes after a hard day's work, eggs are on the menu here as well, usually because I forgot to plan for supper!

Dangerous Shards: Off the topic but not - I once experienced a 'sharding' explosion in my workshop in Wisconsin. Somehow, the heat went off and it was super cold that night. When I went into the shop next morning, the PVC pipe I had used to run water had frozen - and exploded! The rupture sent sword tip shards all over the room! Had I been in there when it happened, I'm sure it wouldn't have been pleasant - and I probably would have said "Yikes" myself...ahem.

Well, so stuff happens. Clean up the mess and press onward! Cheers from the farm.

Rosalea - Yep, that old planning thing. When one has a busy day, it's almost imperative to have a dinner plan in place early on in the day. Or at least it is for me. But as you say, eggs can be (and often are!) a good fall-back plan. They may not be fancy, but always taste good fresh from the hen house!

Tim - Your es-plosion would have been a lot worse than mine had you been in there at the time! Thank goodness you weren't. Cheers back at you!

Well at least you didn't get hurt! I always inspect all my canning jars and opened up my kin are recently to find one whole jar that the bottom head just cracked off of luckily it didn't go everywhere and was contained but kind of a shocker since I always inspect my jars!

Nancy - I've had a couple of jars lose their bottoms while in the canner! What a mess I had when I lifted the jar and the innards flooded the canning water! I guess it can't be helped as some weaknesses don't show up upon inspection of the jars, as we all try to do.