The Challenges of Gardening 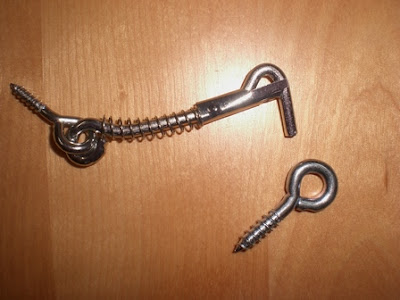 We put two hooks on the front and two hooks on the back of the cold frames and the corresponding eyes on the raised bed frames.
Eureka, we finally found an attachment method that securely held the cold frame to the raised bed.  Boy, were we feeling smug.
Early yesterday morning, around 5 a.m., we had a rain, wind, lightning and thunder storm.  Light on the rain, very heavy on the wind.  Was this forecast?  Nope.
Monday night we had heard that there was a slight chance of rain overnight and the temperature was to remain warm after a hot day, so I chose to leave the cold frame covers open over our slicing cucumbers and over our pepper plants.  As all you gardeners know, you can't beat natural rainfall as a huge boost for parched soil and the plants growing in it.
The 5 a.m. storm woke us and we could hardly believe the scene as we looked out on the garden. 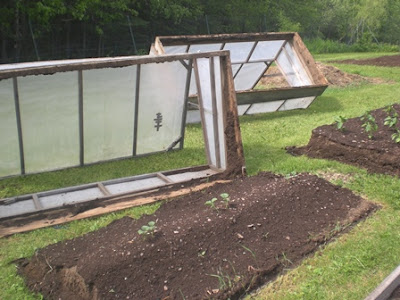 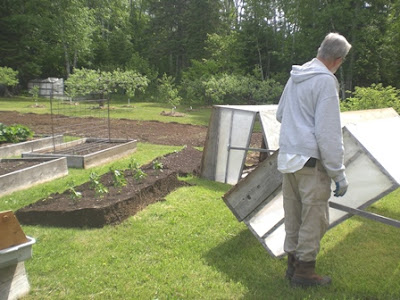 Amazingly, there was hardly any damage to the cold frames (that a little tweaking couldn't cure) and with only minimal shovel work, the bed frames were put back on/in the soil from where they had been ripped.  No plants sacrificed their young lives during the event.
Oy.  All's well that ends well, but I gotta say this makes me all the more hesitant about the greenhouse Papa Pea wants to put up over part of the field garden.  I would really be upset if the wind tore something like that apart.
Posted by Mama Pea at 6/09/2021

That had to be some powerful wind! So glad that it didn't truly wreck anything.....amazing! Yes, I would be hesitant about a greenhouse now too.

That was some wind! How deep are your frames sunk into the ground? Mine are 12 inch planks sunk in at least halfway. I have been thinking a lot about putting hoops over, attached to the plank frame, and plastic over that, but then how do you tend your plants without having to remove the plastic each time? I like how you have lift-off frames. Do you think the damage would have been less, or more, if the tops had been closed? A lot of the enjoyment of gardening for me, is cultivating around the plants and tending them. Sometimes I think I enjoy the nurturing part more than the harvesting and preserving part!
So glad there was no permanent damage! We had a violent TS last night that woke us up with a big boom right over us, but so glad to get the rain we have needed so badly, 7/8 of an inch in the gauge this AM! It is a beautiful, un-humid, bright June day today. (and the bugs aren't even that bad!!!)

Sam - Here's something that made us tear our hair. Right when we got up Tuesday morning, saw the damage and realized the wind was still blowing mightily, my husband turned on his computer to check our local weather site to see how hard the wind was actually blowing. Ya know what it said? CALM was all it listed under wind velocity. :o\

Rosalea - In the past we've sunk our wood raised bed frames down about 6". But after seeing how fast they decayed and had to be replaced, we decided to work the soil under where the bed would be, then just dig the framing in about a couple inches. The frame is then filled with dirt and away we go. So at this point, some frames are still sunk into the ground quite a bit, but others not so much. When the top (or lids) of the cold frames are open, they act like sails in a wind. We've never had problems when the tops are closed and secured to the bottom portion of the cold frame structure. It is a pain to reach over the cold frames to weed but we have only two raised beds with cold frames on them this year. Just the cucumbers and the peppers.

Holy cow, that must have been a shocker! -Jenn

Oh my that is crazy. Glad you could put them right back where there were, but what a storm you had.

OMG! If that wasn't such a PITA it would be hilarious. This is why we have been so hesitant about buying a greenhouse kit. We get wicked winds and since we're "sheltered" on all sides by the woods, they come from all directions sometimes, seemingly, simultaneously. I'm building my greenhouse out of lumber and using the auger.

Kristina - Yep, the clean-up and making all right again was much easier than it could have been.

SmartAlex - We, too, around literally surrounded by heavy woods and have never been able to figure out how the high winds manage to (regularly) hit us with such force. :o\ IF we ever put up a greenhouse, hubby assured me it will be anchored in cement! Or some such construction. Still, I worry about the covering being damaged by the wind . . . and how can you plan for that not happening?

Oh no! I am glad that you were able to put everything right again!

Wow well at least you didn't lose your whole crop and your cold frame and lid! Maybe try adding some conduit or rebar down about three or four feet to stabilize it? Might help having something deep holding the cold frame in place maybe

MaryMc - Thanks, and the whole shebang actually sustained less damage than when the cold frames have been blown off the raised bed frames. Figure that one out!

Nancy - Yes, before going out into the garden for a closer look, I was afraid several of the pepper plants might have been broken off. One was slightly tipped over but the roots were still in the soil and I put it back in an upright position. The cucumbers were too small to be hit by anything flying over them. We've used the rebar down through 6 x 6s and 4 x 4s to anchor the base of small (and big) sheds so that's certainly something we could do to the raised bed frames without too much trouble.

Looks like you dodged a bullet, for sure! Wow... that is quite a shocker! Have a better end to your week!

wyomingheart - Yep, the whole shebang could have landed in the next county. In pieces!