Mother Nature Did It Again

There's no doubt those of us living in northern Minnesota expect snow in the winter time, but this is crazy.  To get two heavy dumpings of wet snow because Mother Nature decided the thermostat should be set right at or just above freezing?  Not nice, Mother Nature. 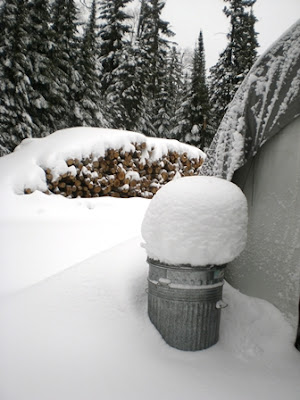 Last night we got our second "warm" snow of the season.  The temperature hovered right around 32 degrees so the snow fell in just about the wettest state it could possibly be.

Today the temp is at 34 degrees and it's been drizzling since about 7 a.m.  After being out clearing paths and doing a LOT of shoveling for about two hours, not only was my down chore jacket soaked, but the falling moisture had gone right through to my sweatshirt and turtleneck which I had to strip off and put in the dryer when I came in. 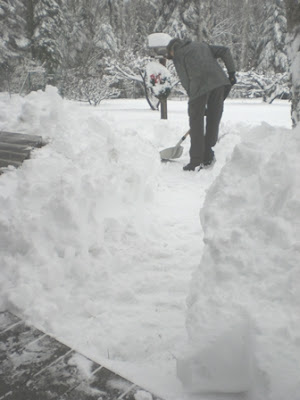 Above is Papa Pea shoveling the path to the bird feeder.  He and our good neighbor to the east conferred and decided it wouldn't be wise to plow the driveways until the rain stops and the temperature drops.  Clearing off the snow now will allow the falling moisture to form glaze ice on any plowed surface when the temp does drop.  Of course, there's the chance that when the super-saturated snow freezes, it will be like trying to plow wet cement.  Six of one, half a dozen of another.

This afternoon Papa Pea will make a pass or two up and down our driveway with the tractor so if we had to drive out, we could do so.  Good neighbor D (we plow his driveway, too) will do the same on his driveway with his ASV.

I sure hope this is the last time this winter we get such unusual conditions.  No fun (are you listening, Mother Nature?), I say no fun shoveling snow when you toss a shovelful away . . . and it all sticks to the shovel!
Posted by Mama Pea at 1/07/2019

That's the worst! And it's heeeeeavy, too! I guess I will not be complaining about our no-snow-but-Arctic-temps weather. My quail have been texting their farm of origin in California, demanding to be returned. I hope things get back to normal for both of us!

That's a lot of snow! ugh ! don't wish that on anybody. We're suppose to get flurries to night. Don't expect much, tho'. Take it real easy shoveling. That's to heavy. We're not spring chickens anymore. You brought back memories with the orange pomander. When I was in the girl scouts we made them for Christmas presents for our parents, I forgot all about that until I saw yours. I don't remember how to do them. Stay warm!!

ha! nada in So Minnesota -- if fact since Friday it's been above 40' and most of the snow is gone! no rain either (thankfully) ...

I am not wondering about when we will get snow, anymore. Best for me, to not put anything like that, out into the Universe, I guess.

Mmmmmm, is there an anti-wet-snow dance??? Maybe a rain dance, in reverse? Nahhhhhh...

Yikes! Heavy Heavy Heavy!!! I hope the snow princess got it all out of her system and its smooth sailing for awhile... at least until you get all dug out! That's not good that your jacket was soaked through to the shirt below... that's a good time to get a cup of cocoa and warm up for awhile...

Oh boy, that is some big snow! I hope it doesn't keep falling and you catch a break. We are in a freezing rain warning right now. We'll see what happens. -Jenn

That's awful! To have to shovel snow in the rain is just wrong! I hope it freezes and you can get things cleaned up. I love snow but from the inside....watching it fall and being cozy but there's a down side to everything. You're probabl! in better physical shape than the rest of us though.

We got it in the neck too Mama Pea. Sunday night it came in like a force. Monday was no fun. Driving highways and then city was down right ugly. It took an hour and a half to blow the snow just out of the drive - never mind anywhere else on the property. Gee whiz Mother Nature - enough!

This one missed us and I don't mind at all. Be careful with your backs. (It does make pretty pictures though.)

Now that's enough snow...RIGHT!!!! Mama Pea, I love the northern part of the United States but surely don't miss all of that snow. It's worse when it's wet outside, and it seems you can't get warm enough because of all that moisture. That's enough back-breaking work shoveling all that snow. Good thing Y'all have a tractor to clear your driveway, can you imagine shoveling it all out? Do you think that's the last of the snow for winter?

Hugs, and Love to You and Your Family.

Dear Readers - Blogger has been eating my comments again. Sigh. I get something half-typed and poof into the Ethernet it goes. Hoping this morning works out better.

Lynne - One reads about girl scout troops making them, kids around the kitchen table, etc. but I don't know how tender young fingers could manage. Maybe some whole cloves aren't as pointy as others? Wearing gloves would help but that would make it difficult to pick up the little cloves.

Marie - Well, you know Minnie-soda is a big state and you live way down in the Banana Belt! ;o}

wisps of words - Seems to me there is a lot one cannot say anymore and still be politically correct! There's not much common sense left anywhere these days. Grumpy about the whole thing, am I? Yup.

wyomingheart - The temp was so warm I didn't even feel any discomfort when my first three layers got soaked the other day. Was kind of an inconvenience though! More snow expected today but the temp will be cold. I think.

Jenn - Freezing rain makes ICE and that's something I can do without! At least one doesn't have to shovel it though!

Kristina - So far, you've had an easy winter, haven't you? Enjoy it while you can, my bloggy friend!

Sam I Am - When having to do physical work outside, both hubby and I joke about how much money we save by not having to buy gym memberships! Not good, of course, when the physical workouts come in such intensive periods. Sure does make you realize you don't use all your muscles every day!

MrsDM - Yes, it was a slow process (two days!) getting all the snow moved to a good spot. We're so happy to have our good neighbors to the east as we combine efforts in gettin' it all done!

Sandy - Last snow of the winter? Oh no, m'dear, we're just getting started. We get the most inches of snowfall in March!! And we have half of January and February to go first! Good thing we like snow. (Some days more than others!)

Re: Your comment on my blog, about pumping water into street, and it freezing... -sigh- Yes, I guess so, at least along the edge of the street, where water would run "down hill". And that runs along, where the ("down hill") people's driveways are.

We only pump a little water, in rainy seasons, because we have to have a sump pump in our cellar... because we are built up on the rock. But that is not in freezing weather.

And when he has to backwash the pool, in summer, some goes down there. Again, no freezing. And all pools do this.

With luck, water accumulation won't happen much, in freezing weather....

The house down on the corner, with the spring... Their drain pipe comes out, at the street, and there is a street drain there. Which only works well, if not filled with leaves.