Eureka!  Not only am I on time with this first of the month posting of a picture of the raised garden beds, but I'm a day early!

As tomorrow is shaping up to be a super-busy day, I figured it might be a good idea to get this post up today.

You know how it goes by now.  Starting way back in early, early spring, we have: 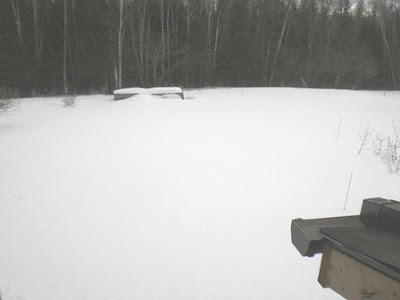 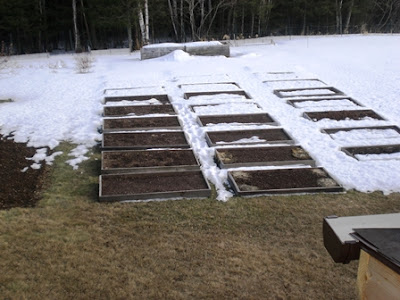 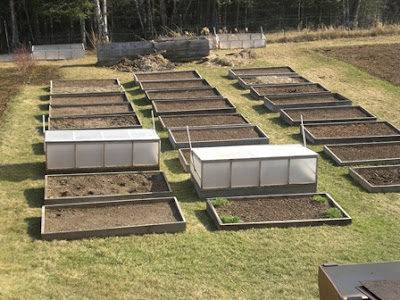 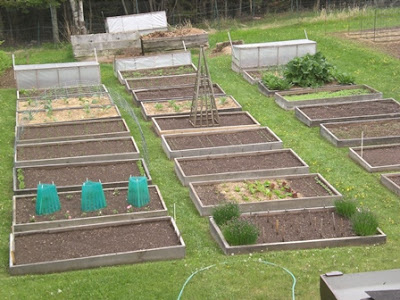 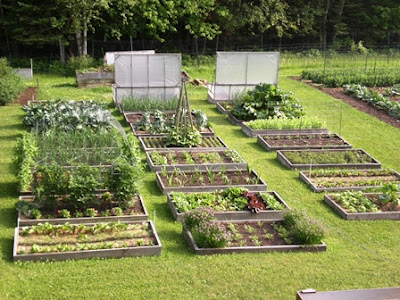 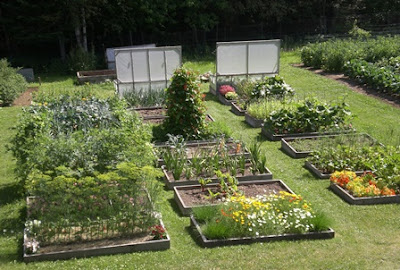 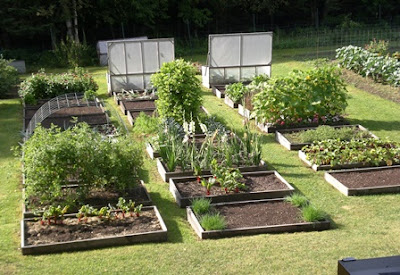 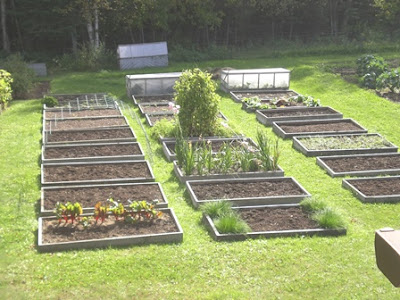 The beds aren't completely empty as you can see, and I still have beds that are waiting for their fall application of compost.

The two cold frames at the back of the middle and right hand rows are still producing green peppers and slicing cucumbers.

We haven't had even a slight frost yet, let alone a killing frost.  Rest assured, though, it is coming.

It's been interesting (for me anyway . . . hopefully you haven't been too bored) to see the changes from month to month throughout this growing season.  I rotate what is planted in each bed every year (well, except for the peppermint bed and the bed occupied by the rhubarb) and by looking at how each crop grew throughout the summer, it's given me ideas of what to plant where next year.

I'm calling this October 1st post the last one as next month should show only empty beds with a couple planted out to garlic and covered with mulch.  The beds will look fairly drab and forlorn as they await a good snow blanket cover under which to spend the winter.

And I'll probably be on the couch under a quilt with paper and pencil planning next year's layout.
Posted by Mama Pea at 9/30/2018

I very much enjoy the comparison shots!

We do not have such a separation of seasons here in SW France, with hardly any Autumn and not much Spring, what we do have is fluctuating temperatures which can confuse us and the plants. Even now I have self sown tomato seedlings coming up, and a self seeded courgette is busily putting out flowers, but the winter pansies I have planted are not happy because it is not cold enough for them!

Thanks very much, Michelle!

Vera - Oh, the challenges all of us gardeners face! Even when we know the temperatures SHOULD be what a plant wants, the reality is it so often doesn't happen. Mother Nature does not want to be controlled!

I love your comparison shots and I may have to steal the idea. Our raised beds are about 2x as tall as yours (hubby didn't want to bend over too much, being as he is 6'4" tall). I'm hoping to get out to my raised beds tomorrow to check them, I was out of town all weekend and he mentioned pulling everything out. I told him he'd better not so we'll see if my piercing gaze got through to him.

Yes, I love First of The Month photos of the same scene. Did that once, taking a pic out the front door, of the woods across the street, first of the months.

Here, our few flowers are still blooming, so we can't bring ourselves to pull them out. But have to, as soon as they are "done."

I like the way you document your going on's in the garden. Smart lady ! Some people don't realize there is so much work that goes with a garden. Now get under the quilt with a good book and your garden planner for next year !!!Take Care!

Thanks, Ruth! Yes, definitely do "steal" my idea and use a monthly photo on your garden or anything else you want to document. It's really taught me a lot.

There are times when I do dream of tall raised beds. I know of care centers or apartments for the elderly where they've done this very successfully. So it's just not for tall drinks of water like your husband!

wisps of words - No, don't pull out your blooming flowers until old Jack Frost does his damage to them. We go long enough without blossoms from now until spring so enjoy, enjoy, enjoy!

Happy October back at you! Isn't this a lovely month??

Lynne - Silly me! I'm always surprised at how much work is involved with putting your garden to bed each year. You'd think I'd remember as the same thing happens each year! Lots of grunting and groaning been heard on the acreage lately . . . somehow, it's just not as exciting as planting those starts and seeds. :o}

Love this! I should so do this next year but I know if never get round to it. Your garden always looks so amazing. Mine is productive but man do I grow some sort of weeds as well!