Plowing through my big box of recipes I've been saving to try has given a real boost out of the cooking lethargy from which I've been suffering lately.  I get so tired of preparing what seems to me as the same old, same old dishes.  I personally like a lot of variety in the foods I eat so finding new recipes to try has lit a fire under my desire to get enthused about preparing meals again.

I promise not to subject you to every one of the recipes I try and decide are keepers.  However, when other people sample a dish and say, "This is really good!  I'd like to have the recipe," it seems the recipe might be worth sharing with you, too.

Let's talk about the "one loss" first.  It was one of those breakfast casserole dishes you make the night before and bake the next morning.  I prepared it Sunday night and we had it for breakfast the following morning.  Not bad, but nuthin' special.  We finished the rest of it this morning, but I'll not be keeping the recipe.

One of the two "wins" is a new soup I cut out of a Taste of Home magazine.  I made a couple of small changes to the recipe, and Papa Pea and I ate it for lunch and dinner one day, and I still had enough left to invite Chicken Mama and Gilligan to help finish it up with us yesterday noon.  Everyone loved it.  I personally think it'll be even better with ham chunks instead of the chicken. 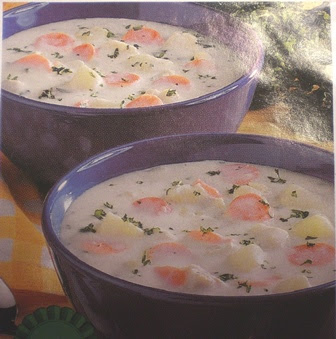 I didn't think to take a picture of it when I made it, but I can assure you it looks just like this shot of the picture printed with the recipe.  (Except for the green peas I added in my version.)  If you think you want to try it, you can find it on the Taste of Home website.  It's called Cream Cheese Chicken Soup.  Yummy.

The second recipe keeper I'll print out here 'cause it was sooo good.  Plus, I have no idea where I got the recipe originally.  It looks as if I clipped it out of a newspaper. 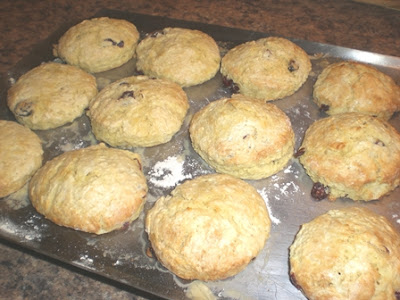 Just out of the oven.

These are the best scones I've ever tasted.  (Not that I've made a life of sampling scones.)  Usually I find scones to be a smidge on the dry side which doesn't appeal to me.  (I mean just how much clotted cream can you slather on one?)  These were not dry at all.

Mix flour, sugar, baking soda and salt in a large bowl.  Add and cut in butter pieces with a pastry blender until mixture resembles a fine meal.

Mix in egg and 3/4 cup buttermilk.  Add one extra tablespoon buttermilk at a time as needed.

Work dried cranberries into dough, then turn out on a floured surface and pat to 3/4" thickness.  Cut using a round cookie cutter and place onto floured baking sheet.  Brush top of scones with buttermilk.

I had never baked anything on a sheet that was just floured.  Not greased and floured, but just floured.  I was surprised that this method created a very light, golden, soft "crust" on the bottom of each scone.

I worked in ALL of the buttermilk and perhaps even a little more.  It was needed to get all the dry ingredients incorporated.

I baked my scones the full 18 minutes which seemed perfect.  My yield was only 12 scones, but that was probably because of the size of my cutter.

Okay, back to my sorting.  Who knows what other treasures I'll find?  (Or how many more wastebaskets I'll fill with discarded recipes!)
Posted by Mama Pea at 2/20/2018

Only way we know, is to try!!! Hooray for 2 wins. And good to discard the loss.

That soup does sound/look good. A recipe which makes more than one meal, is wonnnnnderful!!!!

Understand what you mean, about scones being a wee bit on the dry side. Even G/F ones are. Have not had a real scone, in a dog's age of course.

Giving them a bit more taste of moisture, is the best idea, though.

wisps of words - Hahaha, spoken like a person who has had some up close and personal experience with clotted cream??

I tend to make and we tend to eat a lot of soups here. It can be an all-on-one meal chuck full of nutritious ingredients and often a pot makes enough to freeze part of it or serve it two or three times in a week.

I just love Taste of Home. My mom would buy me a subscription every year for many, many years. I love those scones too!!

MrsDM - Yep, Taste of Home has ALWAYS had so many good recipes in it. I think that's because the recipes weren't ones developed in a "test kitchen" somewhere but ones submitted by real folks just like us who actually cooked for their families!

I always liked Taste of Home magazines and recipes. I would enjoy both the soup and the scones! -Jenn

Jenn - All foods are gonna sound better to you when you're feeling better! Get well soon.

Ah, the recipe pile. I've been there, and can say I've almost dug myself out of mine. Only a few left. The soup and scones look wonderful!

Those scones look delicious! I will have to search out that soup recipe because the addition of cream cheese, well, is just over the top wonderful! I love trying new recipes but it's hard to justify all the fuss when it's just me. That's why, if you ever are a dinner guest (yes, please), you will be assailed with every new recipe I can get away with. Don't apologize - just keep 'em coming!

Your scones look so good! I'm going to bookmark this for the recipe! And that soup....oooh luscious! I love Taste of Home recipes, big fan of their stuff! Can't wait to see more! :)

I have been glad to see your husband has recuperated, for the most.

My youngest made the scone recipe tonight with the changes you suggested .... white chocolate chips, more craisins and orange peel. We made 16 from the recipe in wedges rather than circles. They were delicious. Good choice to make and share. Thanks.

Made those scones this morning. Used blueberries from freezer and lemon peel. I don't think there will be any left when I return from work.

Kristina - At this point, I don't know if I ever want to clip out a recipe again! You've made and tried out most of your "old" recipes. All I've done, basically, is organize mine!

Rain - Both the scones and soup were yummy. If you get the chance to try them, I think you'll be pleased. Yay, Taste of Home from this gal, too!

Athanasia - I'm so glad to hear you liked them! Yes, cutting scones in wedges is certainly the more traditional way to go. Now I know the white chocolate and orange peel work in them, too. Thanks for sharing!

Theresa Young - Oh, so much fun to hear of first-hand experiences! Now I need to made them again with blueberries and lemon peel. Sounds really good. Thanks for letting me know your experience with them!

Both the soup and scones look yummy! I can seem adding ham to the soup 😊
Cranberry scones with orange zest are one of my favorite scones to have with a large hot cup of coffee for breakfast. I'm going to borrow your recipe, and try it out. Thank you for sharing!!

Sandy - Hope the scone recipe works out for you!

I will be trying this one out. I do like the idea of adding the orange peel. That flavor goes well with the cranberry. Funny how the baking recipes always appeal.......not a good thing!

Glenda - YOU'RE the one who should be posting bakery recipes, baker extraordinaire that you are!!