It Happens Every Year

When we hit mid-August, the days may still be sweaty-warm, but the nights turn cool bringing in the definite feel of autumn.

On my way to get milk from the dairy early this past week, I saw the first orange leaves on some maple trees.  For some reason (although it shouldn't have been a surprise), this year it hit me like a brick.  Probably because we've had such a busy summer with so much going . . . and (surprise, surprise) the list is not completed yet.

Sure, we've still got a couple of months of nice weather, but for us up here in the very northern part of the States, summer is over, folks, so I'd better switch mind gears pronto.

Last night I finished putting by our quota of pickles for the year.  (After my encounter with the bumble bee a week or so ago . . . they are still thick in among the pickling cucumber vines . . . I pick wearing hubby's heavy bee gloves that come up to my elbows.)

The desired quantity of beans (green and yellow wax) are in the freezer.  I haven't canned Dilly Beans for a few years, and because Daughter loves them, she's volunteered to help make a canner or two full of them today.

Cut our first head of broccoli last night.  If you remember, I planted them from seed in the garden later this year in the hopes of missing the egg-laying stage of the dreaded white cabbage moth and be successful in growing broccoli without any (shudder, ish-ish) little green worms.  Looks as though (shhh, could it be?) this may have worked because the head brought in was soaked in warm, salt water to drive any of the little buggers out and nary a worm did appear.  I can only hope the rest of the heads are the same. 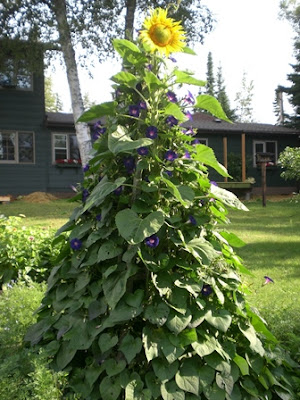 When I planted my tepee trellis
of morning glories this spring
there was a volunteer sunflower
growing in the center
of the tepee.
The sunflower grew and grew and now
reminds me of Nature's Christmas tree
with a star sunflower on top.

I've started to clean up the garden as crops are finished.  Two 8' x 4' compost bins are being filled with the refuge, and Papa Pea has been adding dirt and chicken house bedding in layers.

Tomorrow (and today, also) is to be gray and drippy.  I'm scheduled to get together with gal pals tomorrow morning for a little sitting, visiting, catching up and handwork.  (Handwork?  What's that?  If it doesn't involve harvesting, washing, prepping and preserving produce from the garden, I haven't done any of it lately.)
Posted by Mama Pea at 8/23/2015

I just adore that sunflower peeking out through the Morning Glories!

I'm starting to dig taters and have ripped out the broccoli.
Funny to think we started 2 months ago and are already doing clean-up. I love it. I am SICK of summer!

Love the natural Christmas Tree! Oh how we wish for just a bit cooler weather down here.

The sunflower does look very nice there in the center!

It's always a combination of regret and relief when the beds are done and it's time to clean them up. We've got a few weeks left for the real summer crops and another month for things that like the cooler weather.

Sue - That was my thought when I saw the leaves turning color this past week . . . how very fast our summer season goes. But, like you, this year I am soooo ready for some down time. I've been thinking of you so often lately (in my exhaustive state!) . . . how you say you work hard all summer but winter is your "me" time. Boy, do I need that this year!

DFW - That's the nice thing about our weather. The heat and humidity don't last long enough to drive us totally bonkers!

Mark - I know what you mean, too. I'm actually kinda sad to see the garden start to "die." We have it for such a short time. :o(

So glad you are feeling better from the sting. It's amazing how their stinger can go through all types of material. And your garden flower teepee.... how beautiful! That is simply gorgeous! Oh my, even the thought of cooler weather sets my heart aglow as that seems so far away here as our heat and humidity continue relentlessly. Have fun with your gal friends!!!! Sounds like a LOT of fun!! :)

Lisa - We can't quite believe the sudden change in our weather. The temp is 52 deg., sky is gray and the wind is blowing. Hubby just came in from out-of-doors and commented that it could hardly feel more like fall has arrived. Hoping for some more warm days, but I fear our short, short summer season is over. I can only imagine how much you'd like to have our weather today. I would not have survived your continued heat and humidity this year.

Wow! Your season is short. It seems like it's only been a few weeks since you were planting. Love the morning glory teepee! Good thing y'all got all that wood stored up.

Laurie - I think it WAS just a few weeks ago I was planting! Our season is indeed short, but we're so far north that we get long, long days of light which kinda sorta almost makes up (not) for our short growing season.