We Had Snow Yesterday!

Yep, and we celebrated by going for a hike.

I know many of you (especially some of you living where you don't usually even get snow in the winter) think I've slipped a cog or two for rejoicing at snowfall, but we've continued to be short of the stuff which could mean the threat of forest fire this spring in our heavily forested area.

Although we had a high temp of only 10 degrees (but above zero!), around noon time we bundled up, tossed granddog, Tucker, in the car and drove about two miles from home to experience the fresh air and exercise while beautiful, large, fluffy flakes fell.

Hubby had just received a new pair of insulated, slip-on chore boots he badly needed so decided to try them out. They felt fine while we were out, but then last night when he slipped them on for a last outside check, he noticed some very sore spots on his feet and legs where the boots had rubbed.  Turned out to have not been a good idea to wear them for the first time on a hike, but haven't we all done a similar thing in the past?  I know I have.

On our hike, the snow did stop about halfway through, but the covering on the ground was still gorgeous.  Got a total of maybe 5-6" which isn't much for us, but we're glad for what we can get this late in the season. 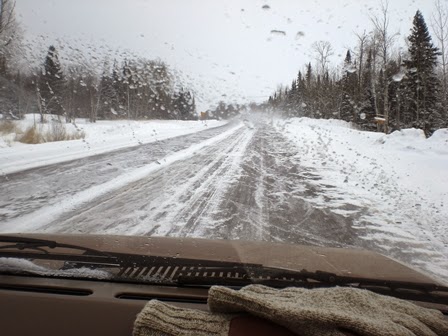 We followed a snowplow part way home, but you can't see it ahead of us because of the light and fluffy snow blowing behind it. 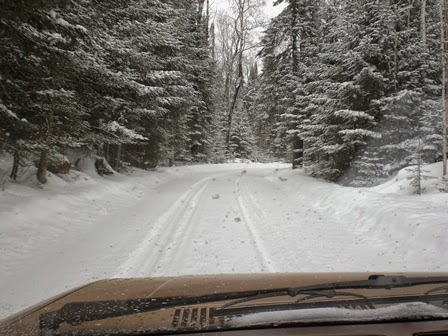 This is on our driveway part way in to the house.

As I wrote in an e-mail to a friend earlier this morning, I'm having trouble with guilt creeping up on me and spoiling the time I've been spending knitting lately.  I'm nearly done with my second pair of socks, and am already thinking of the skein of yarn I want to pull from my stash for the next pair.

My *&$%^! guilty conscience keeps reminding me of all those inside household-y jobs I could/should be working on now during this last month or so of winter.  I think I'm going to have to employ the ol' timer trick.  Set the timer for one hour when I will work like a busy little beaver on a project from the "should do" list and then reset the timer for another hour in which I can sit and knit.

Aw--I think you should just ENJOY that time knitting in front of the woodstove.
Later on in life, it won't matter a lick what chores did or did not get done (filing, dusting, whatever), but memories of times ENJOYED do matter.

Beautiful snow--so glad you got some.
Now please send the leftovers here.......

Oooh oooh, I'll take some leftovers, too. It has been a dream of mine, since I first saw the movie Step Mom, to ride our horse in falling snow...but a hike would be nearly as good. Glad you got to experience it. Have a great weekend!

Sue - Keep it up, gal friend! Maybe between the two of us we can kick my guilty conscience to the curb . . . and be happier for it! :o]

Laurie - You're in South Carolina, huh? It could be tricky but I'll bet with some luck and quick thinking, you will get the chance to ride your horse in falling snow!

We have sunshine today to start the weekend and it feels wonderful. Good weekend wishes to you, too!

I love the drive to your home. That is just beautiful!

Thanks, Kristina. We're only a couple miles out of town but our driveway is about 1/4 mile long so we really have a feeling of being back in the woods. It's a nice walk out and back to get our mail, but is slightly uphill on the way back in (you never notice it when driving) so you get a little workout! Oooof.

Aw. It's darn pretty up there. And the way I see it, if it's going to be cold...there might as well be snow. At least it makes the pictures nicer. :) Glad you were able to get out and about. And I'm thinking I might need to use the timer trick, too. So many things I KNOW I should be doing to get ready for when the snow does go away...but...but....but.... ;)

I'm glad you finally got your snow! It does make the place look beautiful.

Not to be too much of a whiner, but between the plus or minus zero temps we've had here for awhile and the additional few inches of snow we get every blessed time it gets above 15F, most of the folks here are ready to be done with all of it. True to form this winter, we've got more snow coming on this balmy 25F day, and tomorrow its back to the basement for the mercury (or whatever is in thermometers these days).

I'm glad you're enjoying it all, but I'm having to work at being patient in waiting for spring. :-)

Amy - SO good to hear from you! Wanna know how my timer trick worked this morning? I set it for my 60 minutes of "work," it went off but one thing led to another and I just kept right on doing everything under the sun but sitting down and knitting. Now it's 4:45 and I THINK I'm going to make it to the couch and my sock right after this!

Mark - You've really had more snow in your area this season than usual, haven't you? Whine thee not, it will make you tough! (Tough for what, I have no idea, but it sounded encouraging, right?) Our temps are supposed to be even colder than they have been tomorrow, too. Ugh.

I've done the "new shoe test at the wrong time" twice. Our once in a lifetime trip to Italy for our 20th Anniv. Brand new 'stylish' Clark's & once to Montana for a ski vacation. Both times I only wore those new shoes/boots once because I got blisters. I love your driveway! Hoping for more precip for your guys before winters end. You do know that it's just around the corner, right?

Ah yes, the new boot test at the wrong time. Yup, done that before, learned my lesson. Love your snow but not how cold it gets where you are. It's an early spring for us in the West. All our snow is gone and it's been sunny and a lovely 10-15C every day for the past week. We had a guy come to aerate our lawn today. Gonna rake up the plugs tomorrow. I like your timer idea, maybe I'll start using it to get myself motivated to get those small jobs done.

I had to laugh over your use of the kitchen timer. I use that sucker WAY more than I should and not only for cooking. I usually set it to remind myself to leave for an appointment and other "reminders". I get so distracted anymore...

DFW - Wouldn't ya think we would learn? Buying new shoes/boots for a special occasion and then nearly ruining the occasion (and our feet!) by wearing them for the first time. Geesh.

I like our driveway in full summer time, too, when the trees (okay, mostly weeds and bushes) grow so heavily it almost looks like a tunnel.

Sparkless - I've been amazed at how mild your weather has been. What's with that? You live in Canada, for heaven's sake! ;o]

Tami - Ha! I even carry the timer around with me in the house so I'm sure to hear it when it goes off to remind me to do something. Are our brains cells checking out . . . or are they just overloaded?

It took Dan to tell me that knitting was work too. What a relief! For some reason, something fun doesn't seem like it ought to be allowed to called work, but it's been delcared work and I stand on that!

Leigh - Please go find Dan and give him a big hug for me!

Sadly, we've gone askew somewhere along the line and put too much emphasis on feeling applauded and admired only when we're doing onerous tasks. Whadda a bad fix to be in!

Tell your hubby that my husband thinks knitting is definitely "work." He watches me, shakes his head and says, "Asking me to do something like that would be pure torture!" :o]

You have to break in a new pair of boots, so taking them on a hike started the break in, lol......
I know your husbands feet are sore in a few places. May I suggest a nice warm Epsom salt foot soak to help ease the pain of breaking in his new boots.
This always helps my feet, or anything else that's sore......
Stay warm, and don't forget to set your timer. I know it's hard stopping something you enjoy doing to go do work inside the house.

One can never spend too much time knitting. Especially socks. WHO doesn't need more socks?

Sandy - Good idea about the Epsom salt soak. He hasn't said anything about his feet still feeling sore . . . I should ask him if he's being stoic or healed already!

Carolyn - I like the way you think, girlie! I think I'll make it to the couch with my yarn and needles tonight. :o)

Nancy po - I didn't think we were ever going to get to it looking like a real winter this year . . . but I think we've made it!