"A" is for Asparagus and Apples

Our asparagus continues to come in almost faster than I can harvest it. 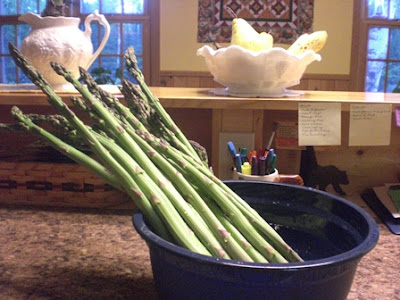 I missed one day in cutting it and look what happened.  Stalks two feet tall!

Our apple trees are finally blossoming.  Some in full bloom and some just starting. 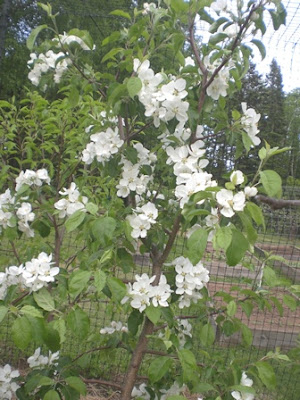 This is the third year for this dwarf Chestnut Crab Apple.  Last year it bore heavily and the apples were the best eating apples we had.  (I didn't know crab apples could taste so good.)  They were bigger than the average crab apple, a bit over 2" across, and we each ate one a day, sometimes two. 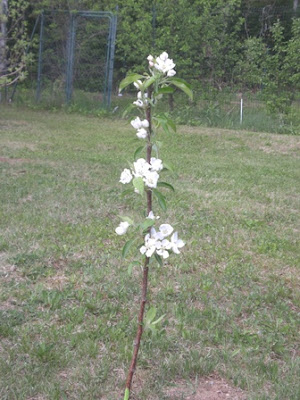 Since we were so enamored with the flavor of this crab apple variety, we ordered another one which we planted this spring.  Look at the blossoms on this skinny, little stick of a tree.  Impressive! 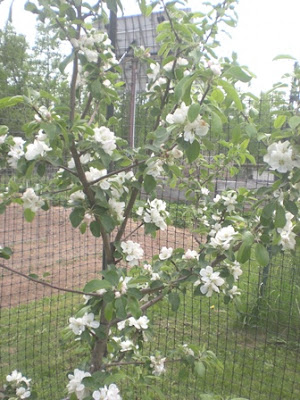 We have several Honey Crisp dwarf trees that are in their third year.  With luck, we may get some tasty fruit from them, too.

Late blossoming this year, yes, but at least they didn't do it before one of our many late frosts.  Maybe they knew what they were doing.
Posted by Mama Pea at 6/06/2020

Wow I didn't know crabapples could be that big or taste that great! We lost some of our apple crop but it looks like some of them are still hanging in there so hopefully we'll get at least some apples this year. We we have a night when it was 24 degrees after everything had blossomed but then we had baby apples and they just shriveled up black no idea what happened. And only part of the apples scratching head

Nancy - I know, I was so delighted to find the crab apples tasted so good last year. Sure hope it wasn't a fluke!! Sorry about so many of your blossoms/fruit getting zapped by frost. I think it sometimes happens all over the country no matter where we live. :o(

Tigger - I still had 6 servings of asparagus from last season in the freezer when this year's crop starting coming in. I don't think I'll have any trouble getting enough again this year. And that's with us eating it fresh nearly once every day. When asparagus finally starts producing, it's a wonderful thing!

Cockeyed Jo - Yes, we've had oodles of bees on our blossoms. More of those huges "yellow-jacket" bees than usual. Wonder what that means?

MP be sure to use a lot of bubble wrap when you ship all the extra asparagus out to me!

I too am ignorant about crab apples. I have always labored under the impression they are small, tart and most often found wild . Banging head on wall.

Are they hybrid ? And how do you protect your fruit from the birds? Are the dwarf varieties easier to maintain? Enough questions?😂

We didn't see anywhere to get fresh asparagus this year. We both love it. The friend that used to give it to us-sold his place-so---bye-bye asparagus for us.

Your tree looks great. We love Honey Crisp...probably my all around favorite apple. xo Diana

You can still find old, old crab apple trees on the abandoned homesteads started up here in the early 1900s. And, boy howdy, are those fruits sour and almost inedible. But I think they were planted because there were one of the few varieties (of ANY apple) available at that time that would grow up here. And I've collected some of those crab apples and made jam or jelly out of them. But this Chestnut variety we have now (no doubt a hybrid) is rich, nutty, sweet and wonderful for eating out-of-hand. It's a variety developed for growing especially in colder climates in the northern states.

Yes, the dwarf varieties of apples, in general, are easier to maintain, mature and bear fruit sooner than full-sized trees, but do have to be replaced more frequently.

We don't always have damage from birds on our maturing apples. Some years are worse than others. Last year, we had only a few apples that had peck holes in them. Other years, we've had to try to cover the trees with netting to get the birds to leave them alone. It's always a struggle. Ooops, I mean different.

NanaDiana - No asparagus?! Looks like I need to send you some just like Goatldi! ;o) I think Honey Crisp apples have become the all-time favorite of a lot of people in the last several years. My hubby worked in an apple orchard all through high school and remembers the absolutely wonderful texture and flavor of Red Delicious apples. But these days, they have absolutely no flavor at all. What happened?

I have always thought of them, as tart. But have I ever really tried one? Not that I remember.

'Course I do love S-W-E-E-T! So I would not be the best judge of heavy tartness or medium tartness or.....

What counts is, you have trees growing and doing well, which give you the fruit, you enjoy.

OOOh! Look at that asparagus! I wish I had had the foresight to plant it years ago. I'm not sure I'll be here for a harvest if I planted it now. Have you come up with a plan to protect your apples from the birds and varmints?

wisps of words - Looks like one of us needs to do some research on where the name "crab" apple actually came from! They are typically tart, almost sour, and good for not much but making jelly. With a lot of added sugar which isn't necessarily a good way to go. Papa Pea first ordered this particular variety because it was touted to be sweet enough to eat and a very good grower up norther where we are. So far we've been very pleased with it.

Susan - Not there to harvest asparagus in the couple of years after planting? Where ya goin', girl? Don't tell me you're moving to Florida where the livin' is easy?!

There have been a couple of years when we've had bird damage to our apples, but not as much as some people. One year I actually tied plastic baggies over the apples to discourage the pecking birds. Yeah, you guessed it. They pecked right through the bags. A couple of years we've tried covering the trees with bird netting. Not very successful. Sorta like banging your head against a brick wall trying to get good apples grown on your own acreage. But as I say, most years we've not had that much trouble with bird damage.

I remember gettng crabapples in Virginia that were so big and tasty. I wish I had a tree here.

Granny Sue - Aha! So another proof that crab apples CAN be large and sweet! Like many others, I never knew that until we got our Chestnut Crab Apple tree.

I am intrigued by the Chestnut crab. I will need to look into those. Thanks for the idea. Phil

Phil - I would think it would grow well for you. Plus, give you some really nice eating apples!

Hello, I am Theresa Williams After being in relationship with Anderson for years, he broke up with me, I did everything possible to bring him back but all was in vain, I wanted him back so much because of the love I have for him, I begged him with everything, I made promises but he refused. I explained my problem to my friend and she suggested that I should rather contact a spell caster that could help me cast a spell to bring him back but I am the type that never believed in spell, I had no choice than to try it, I mailed the spell caster, and he told me there was no problem that everything will be okay before three days, that my ex will return to me before three days, he cast the spell and surprisingly in the second day, it was around 4pm. My ex called me, I was so surprised, I answered the call and all he said was that he was so sorry for everything that happened that he wanted me to return to him, that he loves me so much. I was so happy and went to him that was how we started living together happily again. Since then, I have made promise that anybody I know that have a relationship problem, I would be of help to such person by referring him or her to the only real and powerful spell caster who helped me with my own problem. His email: {drogunduspellcaster@gmail.com} you can email him if you need his assistance in your relationship or any other Case.
1) Love Spells
2) Lost Love Spells
3) Stop Divorce Spells
4) Marriage Spells
5) Pregnancy spell
6) Breakup Spells
7) Death spell
8.) You want to be promoted in your office
9) want to satisfy your lover
10) Lottery
Contact this great man if you are having any problem for a lasting solution
through {drogunduspellcaster@gmail.com}