The beginning of the organic co-op in our town was a humble one . . . on the enclosed front porch of a couple several miles out of town.  The original idea was to enable folks to buy nutritious foods economically in bulk.  We formed a buying club of sorts and it quickly became very popular.

That was the co-op's infancy.  It quickly grew into toddler stage and beyond and moved to a (very small) store front in town.  During this time, no meats were carried and many of the members were vegetarians as we were at that time.  I was asked if I would submit and post a vegetarian menu weekly highlighting a dish containing an ingredient (or ingredients) that could be purchased at the co-op.

One of those recipes was Linguine Casserole with Spaghetti Sauce.  But somehow, someway, I lost my recipe and couldn't make the dish for many years.  Well, I just found a thick folder of all the recipes I submitted to the co-op during that period and now had the "lost" recipe in my hands.  (You can guess where I found this folder, right?  Yep, in THE BOX!)

I eagerly made this casserole a couple of nights ago and it was as good as I remembered so I'm sharing it here.  It would be great with pre-cooked, crumbled sausage or bacon in with the pasta and cheese (if you didn't want to keep it vegetarian) or by adding meat to the spaghetti sauce or adding some pre-cooked, baked meat balls as I did.

I didn't have linguine, so substituted spinach fettuccini.  Close enough.

Combine cooked linguine, eggs, Parmesan cheese and parsley.  In a greased 11" x 7" (approximately) shallow baking dish, layer half of linguine mixture and half of mozzarella cheese.  Repeat layers.  Bake at 350 degrees for 25-30 minutes.

Cut baked casserole into squares and serve with your favorite spaghetti sauce on top.

This recipe can be doubled to serve a large group.  Leftovers freeze well. 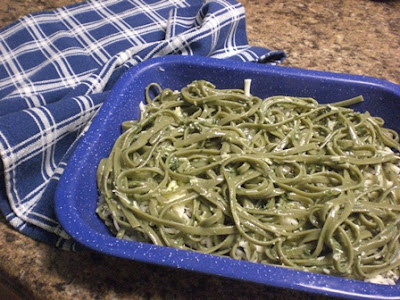 Mixture in baking pan.  Only needs
top layer of cheese. 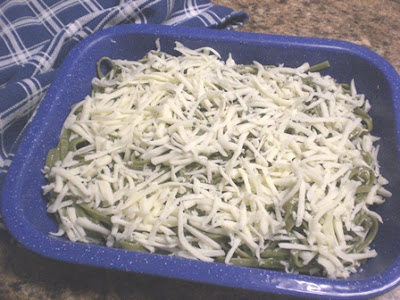 Topped off with cheese,
ready for oven. 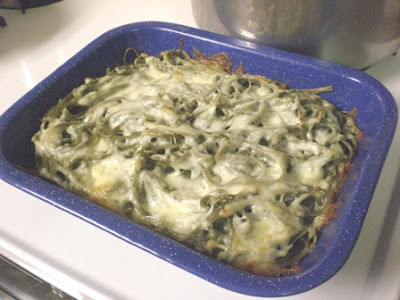 Just taken out of oven. 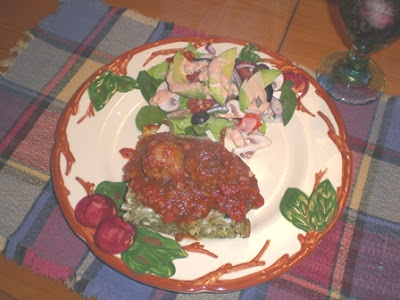 And served up on plate. We made a good dent in it
the first night.

Then I warmed it up the next night (flavor was even better, we both thought) and still had a smidge bit left that I served with scrambled eggs (cooked right in with the leftover casserole) this morning.

Yummmmmm.... Thank you. I love casseroles!

And yes, any such meal tastes better, the next day! :-) They just do.

And more than one meal, is a great plus in any recipe.

Also yes, we would add some hamburg to the spaghetti sauce, which would be easy.

Local update... Snow mostly gone and warmer temps... Son's next door chickens can be out in their fenced in back yard!

And I can again, feed them scraps, over the fence. Love to hear their murmurings, while eating. :-)

wisps of words - More than one meal dishes . . . I adore them because meal #2 or even 3 is sooo easy for the cook! And you're right, when the flavors are all blended, the taste is even better!

How nice that you have your son right next door. And the chickens no doubt get all excited when they see you getting close to the fence! As for fresh eggs? Well, they just can't be beat, can they?

Susan - Yep, this would be a good one for you since you could cut it into squares and freeze the squares to pull out individually for a quick dinner any night. Almost like a TV dinner . . . but so much better!! (Geesh, do they still make TV dinners?)

This looks delicious and I am going to print this recipe off and keep it in my recipe binder. I would keep it vegetarian. We have been following a mostly vegetarian diet since after Christmas. Thank you for sharing!

Any reason you can't add the spaghetti sauce into the pan while it bakes?

MrsDM - You're welcome! May I ask why you're trying a vegetarian diet?

Anonymous - Good thought! I don't know why that wouldn't work. Give it a try!

Years ago I made a "Baked Spaghetti that was similar to yours and it had the sauce in it--I'm going to have to dig it out again. JoAnn (AKA anonymous: )

Excellent! I'm going to make this Sunday. I have some whole wheat linguine. Pretty sure it will be good. Thanks!

'Will try that recipe real soon! We used to be hard core vegetarians but no more; we just feel better with some meat.
I love your history stories. Its amazing how those little food buyer clubs of years ago have morphed into multi-million dollar businesses---for better or worse!-M

It's a long drag to the landing said...

That looks delish! If you find the stuffed half loaf recipe can you post that or send it to me? I can't seem to keep track of anything these days.

Morning Mama Pea! I have never been a big meat eater myself but my husband is a carnivore through and through. I was a vegetarian for many years before marrying him and he was never on board with becoming vegetarian. There are some meats I do not eat for ethical reasons too. But with the ongoing price hikes in meat and it is cheaper to eat vegetarian he was actually okay with my suggestion awhile back. We eat mostly fish and I will cook him a bit of chicken now and then but never any pork, veal or lamb. And maybe he will get a hamburger once every 3 months! :)

MrsDM - Ah yes, combining the vegetarian and non-vegetarian diets! We stopped being non-meaters many years ago, but still don't eat large quantities of it. I use it more for flavoring than anything else. I could do without it (I'm a carbo type), but my husband is definitely a protein type. Every now and then he'll say he really, really feels like he needs some m-e-a-t. Then I'll make something like a meat loaf. He'll eat two slices, I'll eat a half slice and the rest will be frozen to be portioned out later. Most of our meat consumption has been duck, goose or chicken in the past couple/few years.

Thanks for your own personal explanation!

JoAnn (aka anonymous) - I'm sure I've seen a couple of recipes for "baked spaghetti" but have never tried one. Adding your sauce right in with the casserole would probably be a lot like one of those.

Phil - I'm sure the whole wheat linguine will be good. When I make "regular" spaghetti with sauce, I almost always use whole wheat spaghetti noodles.

It's a long drag to the landing - I'm guessing you mean the spinach stuffed half loaf recipe from the restaurant?? If I dug that out, reduced the proportions to family size and actually made it, my husband would be so happy! I'm putting it on my list to do and when I get it done, I'll send it to you.

M - As I've said before, we still don't eat a lot of meat . . . for more than one reason. And I always make any meat go a long way. We sure couldn't afford to buy organically raised steak!

Glad you like the little stories with a bit of history in them. I recently came across copies of our annual Christmas letters written when we first moved up here. Oh, my. I'm not sure I want to relive some of that "history" even by reading of it. ;o} Some good times, but some hard times, too.

One of the eventually many co-op's or organic markets that were in Fresno area when we were young sprouted from a buying club that began in the livingroom of one the founding LaLeche League leaders in the area. Your stroll back took my mind so close to the memory of my first time at a meeting and the smell of freshly ground peanut butter filled the room. Wow Mama Pea was it all really that long ago?

Thanks for the recipe as my baby sister the vegetarian is visiting us for the first time in a few weeks. I like you walked down the vegetarian path multiple times and have a good deal of recipes. But this one looks delish and easy to prepare.

We don't eat a lot of meat either. Beef is rare and I am deaf on it being grass fed when it is. Usually chicken or fish. But the menu is still pretty much dominated by the vegetable section.

Your site its perfect!!!
tipsnow

Goatldi - Yes, m'dear, it was that long ago. :o} I've read studies that say the average American diet contains way more protein in the form of meat than our bodies need so I don't feel the least bit concerned about preparing a sparse amount of it. Even when I cook a duck or goose, we eat "leftovers" in a gazillion different ways for a long time.

Have fun with your sister and her visit!

It's a long drag to the landing said...

I will be soooo very happy as well! Don't mind telling you I started to drool a little bit just then!

Yum!! It looks delicious and simple to make, I like that combination!!! :) I might add shredded chicken to it also!