We're a full three weeks-plus into Papa Pea's recovering mode after his fall from sixteen feet up while working on our solar panel tracker pole.

He's to the point now where he's not in such bad pain that each morning when he wakes, he expects to be fully recovered . . . but isn't.  He seems to have hit a plateau where he can't tell much improvement each day.  So goes it after being slammed and smashed, battered and bruised as much as he was.

He hasn't used the walker in a few days, but rather gets around quite well with one cane, but doesn't feel strong enough to solo without any support.

We tried to have him sleep in our bed a couple of nights ago, but that was a no-go so he's still on the couch in the living room where he's most comfortable. 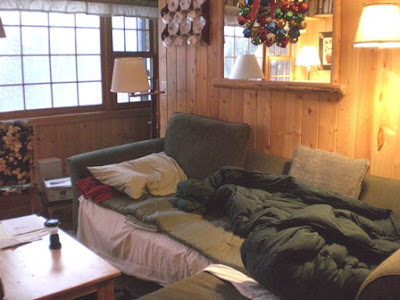 I have recurring thoughts of never getting my living room back.  That's okay, though, as long as I have my husband. 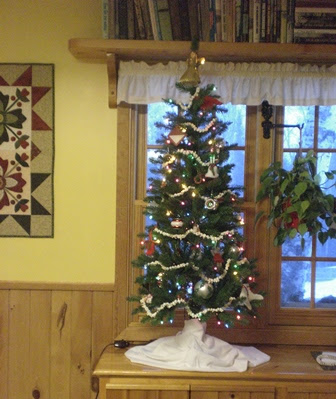 Yes, all our Christmas decorations are still up and making the house look cheery.  (But it's January 14th, for Pete's sake!) 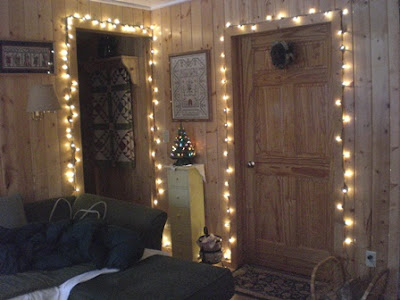 But never have I let packing away Christmas go for so long.  Doing all the outside (and inside) chores the two of us have always shared has kept me busier than the proverbial one-armed paper hanger.  Changing from the Christmas decorations to the After Christmas/Winter ones throughout the house takes me a whole day when I can concentrate on that exclusively. 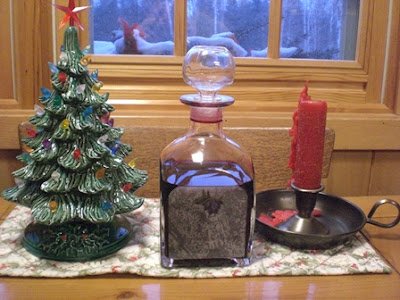 Here's a really good note on which to end this post.  As a Christmas present to both of us, dear daughter took all the (sour, terrible tasting, what-the-heck-are-we-going-to-ever-do-with-these) haskap berries I had in my freezer and made a simply delish sipping cordial from them!  I know you can't make out the label in this picture but it reads:

(Made with organic vodka, no less.)  At last, a good use for our haskap berries!  Next year, I'll try to talk her into making some wine with them.  I have a feeling it will be reeeally good!

P.S.  It's presently -9 degrees (that' nine below zero, folks) and snowing to beat the band.  Doesn't Mother Nature know it's too cold to snow at this temperature?
Posted by Mama Pea at 1/14/2018

Glad to hear that Hubby is recovering even if it is at a slower rate than either of you would like. That has to be frustrating. I know that the older I get the longer it seems to take to recover from anything. I know I don't bounce back nearly as quickly as I once did.

Here SW of the Twin Cities we haven't seen temps as cold as you have had. Still, I am so done with winter. I long for tulips and daffodils. And lilacs. Sigh.

I was thinking about how frustrated he must be when you have to do everything. Poor both of you!

My heart goes out to both of you. The general rule of thumb that I have experienced, and have heard from others is "six weeks". Maybe not six weeks until full total recovery, but six weeks until there is significant improvement where you can see an end in sight. Don't know if that helps. Hang in there, both of you. Don't know what a sipping cordial is, but anything to improve on a sour fruit sounds like a good thing. -Jenn

Yeah, I remember hearing that it can't know below 0°F and seeing that disproven time and again the winter we lived in MN. Shoot, it didn't get above 0°F ONCE the January we lived there!

Any chance you could bring in a good massage therapist or physical therapist to work on Papa Pea? After such trauma, he is probably got knots and adhesions that will make getting full range of motion back difficult, unless a professional can help work them out. That, and long, hot baths with epsom salts!

I can see where the lights around doors and windows do make it very warm-feeling and cozy. Mine are still up. I keep saying next weekend, ha.

Vicki- No doubt about it, even though neither of us feels "old," any recovery takes longer now than when we were 30! But just think, it makes sense when you realize how much longer all of our organs, muscles, ligaments, blood vessels (!) have been working for us at this stage of the game! Things will be fine, we just have to be patient. (Sigh.) ;o}

tpals - It's much harder for him. :o( I'm able to do everything I have to do right now with no ill effects whatsoever. It's just that there's no time for anything else but the basics to get done! But, you know, we're both surviving and this has taught us something. Some changes are in the offing!

Jenn - Yes, the six week time line is what we've heard, too. But, ya know, he's a guy (!) and he expected to be back to normal in two weeks, three at the most! Because he's always been so active, I think this "do nothing" period is especially hard on him. Doubly so when he can do nothing but watch me handle everything! We'll make it, though. No doubt about it! Thanks for your kind words.

Michelle - So you're saying we can't entice you into moving back to Minnesota? (Hee-hee!)

I'm in the process right now of getting him in to see a gal who we know is an excellent massage therapist in the area. He's pretty sure he'll be able to get in and out of our car. We're going to make a test run tomorrow . . . weather permitting. It's still snowing!

Hey, Phil! Good to know I won't be the last one in the country to take down the holiday lights! I'm hoping (fingers crossed) to change our decorations tomorrow.

Glad the recovery continues!! I'm so pleased for the both of you! Technical, MOST of the Christmas decorations are down here, but we have two 'winter' trees this year, and one of them is lit. Kind of goes from reds and greens to blues, whites, sparkles, and pine cones. Spring isn't here yet!

Well darn not 21 anymore is he? You are spot on "he is after all a guy." As Geoffrey was tetering on a chair to see which smoke alarm was on the fritz and I was offering to hold the extension ladder if it were the alarm a good 16 feet up "I don't need your help". The he almost fell getting off the darn chair I jumped upon the opportunity to share Papa Pea's tale of woe. Forever young? NOT!

Mark - So glad to have you back and commenting! I love the idea of "winter" trees. Could I just call our Christmas tree that and not take it down?

So, so glad your "recovery" continues, too. Take care of yourself, please.

Goatldi - Not 21 anymore? That's something none of us want to admit, is it? (Thinking about it, my body sure isn't the same shape now as it was then. Funny how that happened.) Maybe not forever young, but we've still got a lot of kick left in us, don't we? Yes, we do!

Hi Mama Pea :) I'm always surprised to see it snowing at those temperatures. I'm glad to hear Papa Pea is improving, but those plateaus are tough to pass. I remember some injuries I had and I felt like I'd never feel better. I started a pretty intense yoga program in December, dang it was a mistake. I had to quit after a week because my poor hands were swelled up and in pain. To this day I still have shoulder and leg pain! Eeek! I'm trying some gentle stretching each day but I look like Frankenstein's monster when I get up to walk lately lol!

Yay for the liqueur!!! We had great success with our cherry liqueurs this year, even the sourest can work with enough sweet! :)

I have just discovered that if I reply to your posts from home, none of them ever reach your blog! I have no idea why it does this - all I know that if I send from work it is a success. So weird!

I am glad that Papa Pea is slowly getting better and day by day will result in good healing for him! I am keeping both him and you in my daily thoughts! :)

Let's hope the weather we just had continues to bugger off and stay away. We are due to get some warming up. But it is Winnipeg after all....we don't warm up until June. :(

I think Mother Nature is confused this year! We were -7 this morning.....

I feel for you having to do all the chores in this bad weather (or any weather!)I am glad to hear he is feeling better. One morning he will be walking around and it will suddenly hit him "I am feeling normal!". That is how is is for me most times. It comes on so slowly it takes a while to notice that I am feeling better.