Beware of the Big, Bad Goose

We've noticed mild-mannered Father Goose being a little cranky for the last couple of weeks. We thought our unusually warm spell a short while back was perhaps fooling the geese into believing it was time to start thinking about fat, little, fuzzy yellow goslings, if you know what I mean. It's actually a little early for that sort of thing up here near the tundra, but the weather has been so wacky, we blamed our gander going into quasi-attack mode on that.

Sunday morning when Papa Pea opened the geese enclosure to let them out for the day, he spotted one big old goose egg right in the middle of their area. He stood looking at it thinking it was strange Mother Goose hadn't made a nest as she usually does before starting to lay eggs.

Well, apparently Father Goose felt threatened by that big guy standing there because he grabbed Papa Pea's left calf muscle and wasn't about to let go.

I asked hubby what he did. He said, "I grabbed him by the neck with one hand and hit him over the head with the plastic bucket I had in my other hand while sharing a few chosen words about his inappropriate behavior." 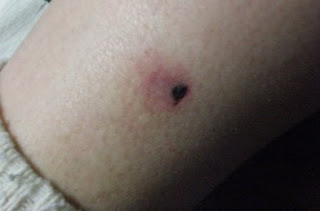 The goose bite broke the skin and was painful for only a short time but, surprisingly, never produced the big bruised area I thought it would.

I know one thing for sure. No way am I going in that enclosure for a long time . . . unless I can find a baseball bat at an early spring garage sale.

As of this morning, Mother Goose has indeed built a big, cozy nest and has four eggs in it. She still goes out grazing every day, but while she's gone the eggs are totally hidden with a layer of straw. I wonder how many she'll lay before she starts incubating them?

Oh, owie! At least you know the nest will be well-protected! I think body armor is in line for goose-duty.

Been chased by a goose while in a canoe exploring the marsh area of a lake - it was hilarious to those watching from afar. Geese can be so unpredictable and large!

Ouch! Glad he's okay-but I'm with you. I would avoid that area. Sounds like Father Goose is just doing his job, but hasn't he heard about biting the hand that feeds him???? That hand could be using an ax---if you get my drift.....

Fun on the homestead,poor papa pea,if my hubby were to get anything like that ,he'd probably lose a leg,thats how bad his diabetes is,he's seeing a wound care specialist right now,it looked like a run burn from his shoe rubbing on his top of his foot,infection starts right away,it wasn't big,about the size of papa peas but deadly,you don't know how lucky you are to be so healthy father goose.I mean pea!Happy EASTER YOU 2

And somewhere Father goose is honking out his tale of the vertical featherless chap who doesnt seem to know his place is on the other side of the fence. He will recall how he successfully herded the tall one back to his own pasture and will request that the he get his own featherless lady to lay her own eggs :)

Well I guess the goose was being a little over protective here! I would not go anywhere near the eggs if I had a choice!

Been there! I know they can be quite cranky when they want to be! My last one that got really nasty, got relocated LOL. Good luck with the eggs!

7-8 eggs, sometimes 9. Truly, they start incubating them and will sometimes lay while they're on the nest, throwing off the idea that all the babies will hatch at once. You'll know she's serious when there's down in the nest and she spends more time on it than off it. The fact that she's covering the eggs up between is a good sign that she's really going to want to hatch them.

Expect her to get up, though. She will occasionally get up to eat, and take a bath. Sometimes it will look like she's not interested anymore, she's been up so long (in your opinion), but geese are amazingly good at gauging the temps under their butts. On a warmer day, she will probably get up more than on a cooler one. Also, the baths she takes help to increase the humidity of the eggs, which is necessary. She knows what she's doing, though it'll look like she doesn't.

As to the tough gander issue: It's the mating season, and yes, they can get nasty. To handle the big, bad gander who is really out to get you, grab him by the neck (the strongest part of the bird), swing him up, and pin his wings under your arm (that's important, because you don't want to get hit with a goose wing. The beak pinch will seem like a walk in the park in comparison). Hold his neck until he's calmed down, and then set him down again. Being picked up is a huge insult, and most ganders will immediately fluff their wings, lower their heads and complain to the rest of the gaggle about his poor treatment. He usually will not attack again. If he does, repeat and repeat. I'd be surprised if you have to do it more than once. DON'T hit him (I know, it's late for that), because he will remember and you and he will be enemies forever, even after mating season is over and his hormones are back to normal.

Just a little bit from my experience. We have quite a few geese at Chicken Scratch and I've dealt with gander machismo for many years. Hope that helps!

Ouch! ....I don't think I'd be able to handle that behavior (even though I know it's normal) for very long. I'll stick with ducks and chickens. :-)

Wow that looks like a painful pinch! Silly goose. That kind puts my little cat scratches to shame.

Susan - I have no doubt that Father Goose would take on ANY predators!

2 Tramps - A video of that goose chasing your canoe would have been something to see!

Sue - That's the same comment I made when hubby told me about the attack . . . doesn't that dumb goose know you're the one who feeds him??

judy - You're so, so right. All of us who have good health need to appreciate it much more!

Jane - Haha! This featherless lady no longer has the ability to lay eggs. All her eggs are long gone! (Thank heavens.)

Wendy - You and me both!

lucky bunny - Thanks for the good luck wishes with the goose hatch. Time will tell!

Jocelyn - Thanks you so much for sharing the really good gander control tips! When Mother Goose is setting, she typically goes out in the late afternoon and voraciously chows down on green grass for about 5 minutes, then goes down to the pond for a quick swim/bath and literally runs back up to her station on the nest. Year before last she laid seven eggs and last year nine. This year? We'll see!

dr momi - Don't tell the geese yet but we're seriously thinking of going to that also . . . ducks and chickens.

We had neighbors way up on a hill who had a goose that was so awful that we would call them when we were coming to visit so that they could lock him up. To this day, geese make me nervous.

that is one lucky papa goose. Ouch

Yikes! I was attacked by a gander when I was a kid, now I can't stand geese. I think you are brave to even have them lol.

Ouch!! How long will his behavior last like that if it's due to breeding? Hope you don't have to carry a bat for long!

Ouch. Hope it heals quickly. I have to admit that I think Papa Pea handled it BETTER than I would have. Yea, I know, the gander is just protecting his area. But still, I would'a given him more than a wack over the head with a bucket.

Ruth Dixon - Ha! That 'bout like having a vicious dog that you need to lock up before visitors come!

Qwaynt - We've had this same Father Goose for four years now but he's never been this aggressive. (He just may be on the way out of here. Just sayin'.)

Stephanie - That's what we've been thinking about . . . little kids. We don't have a lot of them around but do get some visiting now and then and, of course, they always want to see the livestock. We would feel horrible if something unforeseen happened and a child got hurt.

Erin - He'll be like this for sure until the goslings are grown so it will be quite a while . . . into fall anyway.