A Slice of Life on the Homestead

I was working in the garden this afternoon when Papa Pea came to find me and announced he needed my help.

He replied, "I got the Gravely stuck in the edge of the pond." 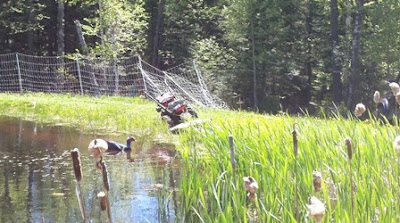 Although this picture makes it look like the mower is tangled up with the electric fencing, it's not.  Papa Pea had folded back that section of fence so he could get in by the pond to mow.  (Looks to me like said duck is wondering what's going on himself.) 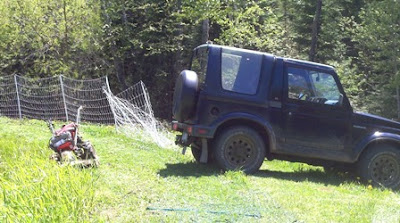 Off we went to fetch our old, faithful Samurai which Papa Pea chained up to the Gravely which did, indeed, have one wheel very much stuck in the mud.

Happily, it didn't take a lot to get it unstuck, and he was soon off and mowing again.

Seems to me he got stuck in much the same spot once last year, too.  Wonder what he was watching then?
Posted by Mama Pea at 5/31/2020

I have drooled over Gravelys many times. Do you all have any other attachments? You may have to supervise when he mows there next time, lol.

I'm echoing Leigh on this one. LOL

Lisa French - Yep, we have several of the attachments for the Gravely. Matter of fact, we have a couple of the machines themselves. They are such unbelievably handy, simple to repair workhorses that I don't know what we'd do without them. Papa Pea and his dad pooled their money to buy the first one all the way back in 1955. We still have it!

Leigh - I'm going to be remembering that these every day happenings are of interest to others. So often I think of them as ho-hum, no big deal, not of interest to anyone else. At the same time, I love to read of the same such things in other bloggers' posts. That doesn't make much sense, does it?

Well at least it only got stuck in the mud and not in the deep water! And it wasn't snowing and 40 below haha!

Nancy - Good points! The photos don't show how much it was sunk into the mud on that one side. The water of the pond this spring was all the way up to where the garden tractor is but has receded because of our lack of rain. When he first hooked it up to the Samurai I was afraid it might tip over into the water before righting itself but it's so heavy (really heavy!) that it stayed steady. Mr. Duck sure was curious and looked like he wanted to help.

Just love the post!! We all get stuck sometimes!! That's what makes us human! xo

wisps of words - If it ain't one thing, it's another! Seriously, these things just happen and it's nothing to get upset about . . . especially in these very distressing times in which we're living. Besides that, this oopsie was easy to rectify!

linnellnickerson - If I could count the number of times one of us has gotten stuck in mud, snow, a too-soft driveway, ruts in the field . . . it's just part of living away from asphalt and sidewalks! And it's common living this lifestyle as I'm sure many of you know. :o}

We finally got a nice rain this morning, but could use little more. The old samurai comes in handy a lot I'm sure!

Well I agree with Leigh. I am not a homesteader and I follow blogs like yours and hers because I am curious about the life style - so go ahead ... wash those dishes!! Haha!!

Hello, I am Theresa Williams After being in relationship with Anderson for years, he broke up with me, I did everything possible to bring him back but all was in vain, I wanted him back so much because of the love I have for him, I begged him with everything, I made promises but he refused. I explained my problem to my friend and she suggested that I should rather contact a spell caster that could help me cast a spell to bring him back but I am the type that never believed in spell, I had no choice than to try it, I mailed the spell caster, and he told me there was no problem that everything will be okay before three days, that my ex will return to me before three days, he cast the spell and surprisingly in the second day, it was around 4pm. My ex called me, I was so surprised, I answered the call and all he said was that he was so sorry for everything that happened that he wanted me to return to him, that he loves me so much. I was so happy and went to him that was how we started living together happily again. Since then, I have made promise that anybody I know that have a relationship problem, I would be of help to such person by referring him or her to the only real and powerful spell caster who helped me with my own problem. His email: {drogunduspellcaster@gmail.com} you can email him if you need his assistance in your relationship or any other Case.
1) Love Spells
2) Lost Love Spells
3) Stop Divorce Spells
4) Marriage Spells
5) Pregnancy spell
6) Breakup Spells
7) Death spell
8.) You want to be promoted in your office
9) want to satisfy your lover
10) Lottery
Contact this great man if you are having any problem for a lasting solution
through {drogunduspellcaster@gmail.com}