March is usually the time for maple sap gathering here in our northern area of the country.  Shortly after that, around the mid-part of April, the sap starts flowing in the birch trees.

Did you know you can collect sap from birches the same way sap is collected from maples?

Our dear daughter has tapped birch trees and collected the sap several times in the past.  Although it's possible to boil the sap down and make syrup from it in the same way you do with maple sap, she uses it as "birch water." 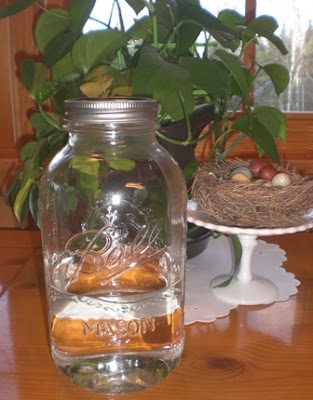 A partial half gallon jug of birch water recently given to us by our daughter.

This crystal clear liquid has been harvested for centuries by indigenous people in many parts of the world and consumed for its detoxifying, diuretic, cleansing and purifying properties.  Birch water, or sap, contains 17 amino acids as well as minerals, enzymes, proteins, natural sugar and Vitamin B and C while also giving us a good dose of antioxidants which we all need these days.

How does birch water taste?  Very pleasant.  (Not at all similar to the taste you might imagine if you chewed on a piece of birch bark!) It's much like a pure, clean water but with a very, very light sweet taste and possibly slightly thicker than water, but not much.  I like to put it in a glass with an ice cube and sip it as I'm working in the kitchen.

We have a large twin birch tree right outside our living room window. 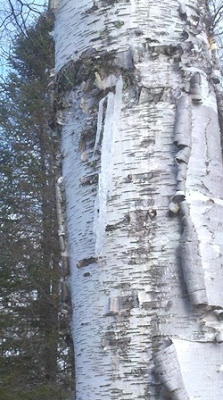 Our temp was hovering in the high 30s and as I glanced out the window I saw a clump of what I first thought to be icicles on the side of one of the trunks. 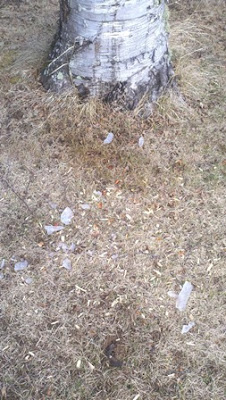 Then I noticed there were chunks of "ice" on the ground that had obviously fallen from the clump. 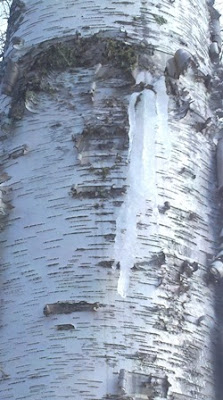 Here's a closer look at the clump on the tree. 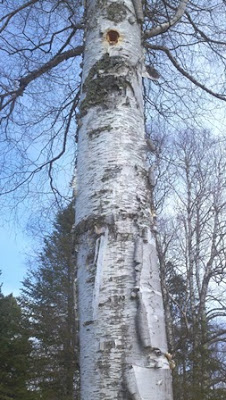 Next I noticed a large hole (brown rimmed) up higher on the tree and looking carefully, I could see drips coming down the tree and collecting on the rough part of bark on the trunk . . . right where the clump of what I had thought to be ice had formed.

It was birch sap dripping from the hole (a natural tap) a bird, most likely woodpecker, had made in the tree!

Papa Pea said the woodpecker's hole was probably indicative of insects under the bark of the trunk which is what attracted the bird.  I really hope that either the woodpecker, or the possibility of insects infecting the tree, haven't done it too much damage.  I'd hate to lose that big, beautiful birch water producing tree.
Posted by Mama Pea at 4/11/2020

When I was growing up in PA we drank Birch Beer- it was like Root Beer but much lighter in taste. I always thought it had just a bit of a wintergreen taste to it. It was my favorite soda and it was crystal clear.
Loved your post today- Hugs-Diana

I had not heard of birch water. It must be quite a treat!

NanaDiana - Yes, when daughter, husband and I were talking about the birch sap yesterday we got onto the subject of birch beer. None of us knows much about it but by your description I have a feeling I would love it. Wintergreen taste, huh? Sounds so good!

Granny Sue - It may be simply psychological, but I think my energy level has gone up a notch since I've been drinking it!

Sounds delicious! I had only learned in the last few years that numerous kinds of trees can be tapped and the sap boiled down to syrup, and I would love to try them ALL, because I love maple syrup! But now I want to taste all the saps, too.

Michelle - Although Papa Pea and I have never made birch syrup ourselves, a couple of years ago a friend gave us a pint she had made. If you didn't have maple syrup to compare it to, it would have tasted just fine. But it did lack the robust, dee-licious flavor of maple syrup. I think I'll stick with drinking the birch water as a health drink! Now you get busy (in all your spare time -- chortle, snort, choke) and make an assortment of syrups from tapped trees and let us know how they turned out. ;o)

Never heard of Birch sap. That was a very interesting Post today. Thank you, Mama Pea for that information! I forgot to mention that I liked the socks you were knitting. xo

linnellnickerson - It really does seem that there's always something new to learn. (They say that's what keeps us young . . . which is not a bad thing!) Thanks for saying you liked the latest pair of socks on my needles. I haven't been knitting much at all in the last couple of days, but I have just turned the heel on the first sock. Once I get past that point, I always feel I'm in the home stretch!

wisps of words - Hope you and your hubby have a lovely Easter Day. None of us are spending it exactly as we wish this year, but future ones will be more appreciated for sure.

No worry about boring anyone with our posts!

No worry about having ammmmmazzzzing things, in our posts!!!

Oh, and no need for LONG posts!

Than plow through longggg posts, infrequently.

Yes, getting punchy. Need to nap, while sitting up straight, in my chair, in lieu of a nap on the bed. :-)

wisps of words - You're such a good leader of our Blogging Pep Club! I'm envisioning you shaking those pom-poms. While napping, sitting up straight. In your chair. With an ice pack on your back. ;o}