Although this may be an appropriate post title for this time of year, it has nothing to do with Halloween.

Back in the spring of this year, I did a post on May 11th entitled "Big Trouble in the Blueberry Patch" about Witches' Broom which is a fungal disease, a growth, we've seen on our domestic blueberry bushes.

Over the summer months, more of this dad-blasted, blankety-blank growth has appeared so yesterday I took my pruners out into the blueberry patch to cut off all of the new growth. 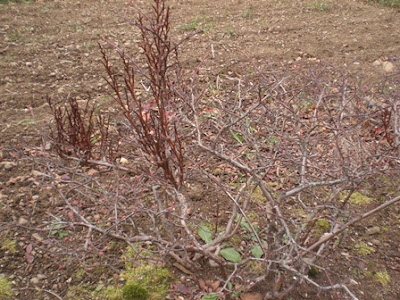 Some bushes had only a small amount on them.
(The dark growth is the Witches' Broom.) 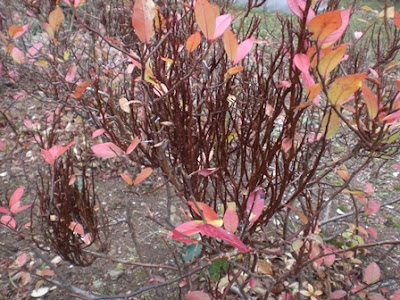 Others were almost totally covered with it.

Last spring, per the information I had gathered, I dug out three of our twenty-one bushes because of the growth coming out of the crown of the plant at ground level.

Yesterday I decided to cut that type of growth as close to the ground as I could leaving the bush in the ground.

Unfortunately, the outlook for our bushes is not good as supposedly the fungal growth will limit the amount of berries a bush produces and eventually kill the bush.

Seems there's not much we can do to prevent or halt the problem (as indicated in my previous post in May) as it's spread by spores on the balsam trees being carried to the bushes by the wind.  We live and garden in the middle of a heavily forested area and removing all balsam trees within a 1,200 foot radius of the bushes (as suggested by articles I've read) is not possible.

So what's the solution if we want to continue producing a crop of blueberries?  I still don't know.  I do know we had a heavier crop of berries this past summer than we've had in a few years.  Go figure.
Posted by Mama Pea at 10/31/2019

Another one of those 2 host diseases... Like Ticks and etc. -sigh-

Perhaps the greater output, has to do with a possible harder winter coming?

Perhaps the bushes _know_ they are under attack, and wanted to put out a super last crop... Almost in defiance of the disease?

Maybe you would have to make a "green house," or a secure poly tunnel.... And plant the new/disease free bushes in there. The covering, would keep the spores from the trees, from getting on the plants?

Good news the crop prospered despite the fungus!

wisps of words - Yes, all that you have said regarding the blueberry bushes are the same type of things that have been rattling around in our heads while we try to figure this all out. These things (plant diseases, insect infestations) do go in cycles, I believe, and are things we just have to learn to roll with. For the past couple of years it's also been a fruit fly that has laid eggs in all the raspberries plants (including the wild ones) in our area. That gives the raspberry lover small white worms in the berries picked. We fought that for a couple of years and then tore out our plants because they (actually) were old and in need of being replaced. Now I'm hesitant to plant new raspberry canes because the fruit fly problem is still prevalent. Hmmmm, a greenhouse for blueberries and raspberries? Always a challenge, but nothing that is going to make us stop attempting to grow our own!

That's so disappointing, but interesting that you got a good crop of berries. I hope that next year it doesn't come back, but I guess that's just being hopeful? Happy Halloween! :)

laurie - Yeah, surprised the heck out of us! :o]

Rain - Oh, I know it will be back. Supposedly once it infects your bushes, it's all over. :o( Depressing, eh? It's just a matter of how long our bushes will keep producing before they succumb and kick the (blueberry) bucket. And how long after that should we wait until this fungus cycle is over and we can plant new bushes. Grumpf. Happy Halloween, and BOO!, to you, my friend!

Bummer! That's so sad to have that many plants affected! I'll hope for the best...

Nancy - Thank you for the sympathy . . . and sending hopes for the best. Just one of Mother Nature's happenings. It's kinda like the weather which has been relatively stable and something you could count on for how many years now. But all of a sudden there has been more hurricanes, more drought, more heavy rain, more fires caused by lightning or tornadoes. And on and on. It's the farmers we need to worry about when a crop of theirs is attacked and destroyed.

Seems like we are being invaded by all kinds of bugs, fungus,and diseases! Often wonder where it will end up. Then we have those terrible fires in California, I pray every night for those people. It does get to be very depressing. xo

Lynne - Yes, I do believe we are heading into a "different" kind of weather cycle. Some of it can be attributed to nature while some of it, I believe, has been brought about by man's foolishly greedy attempt to make money at the expense of our environment.

What if you brought a few new plants in and in as isolated area as you could from the others? I know it is a shot in the dark but look how long it took the established plants to succumb to it. Just saying.

Goatldi - We've been kicking around ideas of what we can do to insure our blueberry supply here on our little place. Since the plants are infected from spores of the balsam trees (which surround us), until this cycle passes (when and how?), I don't think there's anywhere we could put the new bushes that they wouldn't be infected. If we had a large hoop house or poly tunnel or grow house or something like that it might be a solution. Would blueberry bushes even grow in an environment such as that? What I'm wondering about is are the wild blueberries that grow up here in the forest being affected, too?

I'm thinking that it's all the hybridization going on. Is it possible that it's affecting the plant's ability to fight off such parasitic growths?

I was wondering if it's something like the old saw that we shouldn't plant tomatoes, potatoes on the same ground. As awful as it sounds, do you think it would be worth burning up the old plants and move to another location? Sometimes I get these ideas and think "oh I don't know what the heck I'm talking about!" Anyway, I'm happy you got the good crop. That's an accomplishment, isn't it? Phil

Phil - I'll gladly join you in your "I-don't-know-what-I'm-talking-about" idea! Yes, we have thought about doing much the same. When we planted our blueberry patch, some of the trees to the east weren't as tall as they are now . . . and now they keep a good deal of the morning sunlight from the bushes. So we've been thinking there may be a better location, more in the open, for growing our blueberries. Thanks for sharing. Always appreciated. :o}