Each year when I look at the luscious spinach and Swiss chard I'm able to grow in the garden, I think about freezing some of it for use during the winter.  Then I quickly nix the idea because of the stories I've read of gardeners harvesting a garbage can full of the greens, painstakingly washing them, blanching them, cooling them, squeezing out the water and packaging them to end up with four cups of spinach or Swiss chard for the freezer . . . after standing in the kitchen for half a day accomplishing this little task.

I may be fanatical about growing and preserving the best possible, nutritious food for our table, but enough is enough sometimes too much.

But then, eureka!  I stumbled upon an article that said you can freeze greens WITHOUT blanching.  Wahoo, this is something I had to try.

The only caveat is that you should use the unblanched product within six months of stashing in the freezer.  I can do that, I said to myself.  If I freeze greens now in mid-July, that would mean they would hold their optimum nutritional value until near the end of January.

A week or so ago, armed with my biggest stainless steel bowl, out to the garden I went to cut leaves of spinach.

Brought them in and submerged them in cool water, mixed them around with gentle agitation, poured out the water and did it once again. 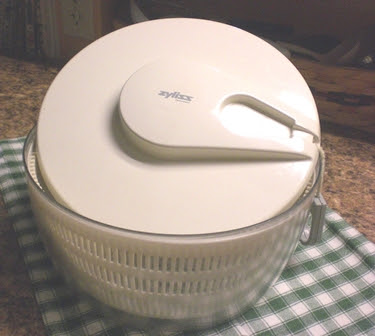 This is my trusty, old, well-used salad spinner.

Then I ran each individual leaf under running water and put batches through my salad spinner.  Spread two bath towels out on the table and laid the leaves in a single layer to further dry.  In a bit, I patted the leaves with another towel to remove all the moisture drops I could. 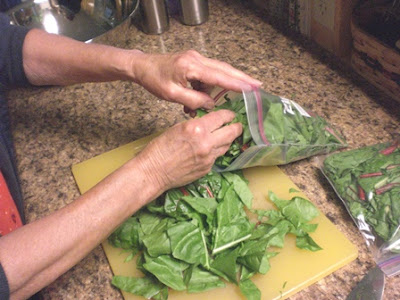 (This picture is of Swiss chard as I
didn't think to take pictures
when I was doing the spinach.)

Stuffing the quart freezer bags as full as possible, squeezing out as much air as I could, and sealing the bags were the final steps.

When I next harvested more spinach, which is planted intensively with grass mulch under the plants to prevent dirt splashing up onto the plants when it rains or when I water with the garden hose, I inspected each leaf as I cut it.  Hmmm.  No dirt and only a crawly bug (or two) was spotted.

Why was it necessary to wash and dry this spinach before packing it?  I knew the soil it was grown in, I knew the plants had not been sprayed with chemical poisons, I knew the leaves were not dirty, and I had flicked off the couple of bugs I came across.

Just to be sure I didn't pack any unwanted "protein" in with the spinach, I inspected each leaf, both top and bottom, after bringing them into the kitchen.  Then I stuffed them into the freezer bags which would be their home for the next six months.  Or, in most cases, less.

A day later I repeated the same process with baby-to-small leaves of Swiss chard.

After the spinach and Swiss chard had been in the freezer for several days, we cooked and taste tested both greens.  They were delicious.

How did I cook the frozen product?  (You could also use the frozen greens in a smoothie or other health drink without cooking.)

I brought a small amount of water to a rolling boil in a saucepan.  Then I took the still frozen contents out of the quart freezer bag, broke it apart so it would fit into the saucepan, and brought the water back to a boil.

I then cooked the greens over a medium flame for, I'm sure, less than five minutes.  Poured off the water and used a wooden spoon to press out as much more of the water as I could.

Back on the stove over a low flame, I added garlic salt and pepper, a little butter and in one case, some sliced mozzarella cheese on top.  (Yum!)  Put the cover on the pan and let the contents simmer until the butter or cheese melted.  (To reduce the amount of nutrients lost, you could also consider steaming the frozen greens.)

Even with the shade cloth cover, my spinach is beginning to bolt so I don't know how much more of it I will get.  Of course, the Swiss chard will remain vibrant and healthy until a really hard frost knocks it out, but until then we'll use it fresh, and I'll keep harvesting some of it to freeze for this coming winter.

I'd be curious to know if any of you try this method of preserving greens and if you find it simple enough and are as satisfied with the outcome as I've been.
Posted by Mama Pea at 7/18/2019

The garden shows all your hard work. So clean and neat looking.

Thanks, Lynne. I truly enjoy doing it.

But I am loudly complaining!!!

No one your age, should look like a "spring chicken," when lying down!

Why do I even say this???? You know perfectly well, that I don't do this freezing either.

Let alone, the fact, that I don't grow such items.

Which, is too hard for me to do, too.

The only greens I freeze is kale. I just pack whole leaves in a bag, press out excess air, and stick it in the freezer. It crumbles really well once frozen solid, and I can then use it in soups and "spinach" lasagne.

wisps of words - That's my best look: Flat out in the garden with my face covered with vegetation! Smooths out all the sags, bulges and wrinkles. Until I get up again. :o)

Kathy - Thanks! We all need more humor these days to keep going!

Michelle - See, my gardening friend? You're way ahead of me in knowing about this process. Lost my first planting of kale this year to what I think were probably flea beetles. Never had that happen before. But am going to try planting some more this weekend.

This is great news!!!!! I have never frozen it because of the long, drawn-out blanching, drying, etc. This might be just the ticket! There's nothing like greens out of your garden in February! I do LOVE that header photo.

That's a great idea Mama Pea. And yeah, why bother washing? Makes the process easier! I'm going to keep this idea for the future! Oh, my spinach has bolted too, can't handle this hot weather!

I'm not going to sell you anything and this is not spam but you should look into buying a Food Saver system. Mine has paid for itself over and over again. If you used it for your greens if would do a better job of sucking the air out and the bags save your food from freezer burn. It's the best thing for freezing green that I have found. Really you should try it.

That's the only way I've done greens for freezing. I don't know who told me to do them that way. Sure is a lot easier !

Susan - I know! Why didn't someone tell us this long ago?? I just know I'll be so much stronger (and intelligent and beautiful and in demand for a modeling job) for being able to eat those deep, dark green veggies in mid-winter! (Hee-hee-hee.)

Rain - Plus, even though spinach prefers to grow in cool weather, the start to our season was so darn COLD that it didn't really grow right to start with. Now that it's growing really nicely, the hot weather is causing it to bolt. Geesh.

Leanna - Thanks for the push toward getting a Food Saver. I've had several people suggest that would be a good investment for me. Maybe I'll have one by next gardening season.

Lynne - Why didn't you tell all the rest of us living in the dark about this fantabulous way of freezing greens?? ;o) I never would have thought about trying it myself. (Dummy.)

Have you tried drying the leaves?

Hi, Sheila - Not sure what you mean? The "leaves" of what?

play bazaarInternational Global Business Leadership Forum 2020 has been announced in Itlay and you can particapte as investor. Register Now at Satta King Make your country wealthy and give the power of Economy and Boost your country. Live Business Leadership forum is ready in 3 March, 2020 Itlay Hotel - Novotel Salerno Est Arechi. Come and Join now.