Big Trouble In The Blueberry Patch

Our blueberry bushes are infected with witches' broom. 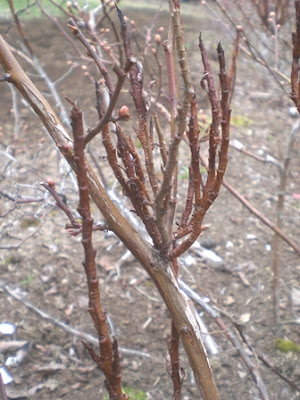 For the past couple of years, I've noticed an abnormal "growth" on some of our domestic blueberry bushes.

I may not be the sharpest tack in the box when it comes to searching out info via the Internet, but for the longest time I could not find anything that would explain what it was that was increasingly affecting our bushes. 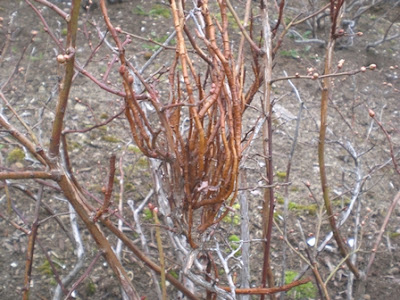 Then finally last fall I stumbled across pictures of witches' broom, a rarely found fungal disease that has a serious effect on the production of berries and the blueberry bushes themselves.  Then I knew for sure what we were dealing with. 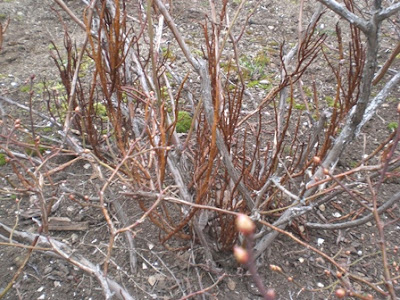 Above is a picture of one of our bushes as it appeared after the snow melted this spring.

The fungus supposedly comes from the balsam fir trees of which we have many in our surrounding woods.  The wind transports the spores from the fir trees to the blueberry bushes.  The infected blueberry plants then produce basidiospores in the spring, which are carried back to the fir trees.  It's a never-ending cycle.

In the past, I had been cutting off the fungus growth, the witches' broom, on our bushes but now realize one should remove the entire branch the fungus grows on.  This enables other branches to possibly escape infection.  But if the fungus has reached the crown of the bush and you see the witches' broom growing from the crown (up from the ground around the base of the bush), the whole plant should be removed completely.

There are no effective fungicides for the management of this disease.

What to do as a defense?  I don't know.  Removing all balsam fir trees within 1,200 feet of the bushes is advised.  Not possible in our location.

I've found that a few of our bushes have to be removed.  As to whether the rest of them will continue to produce berries for us for any length of time, we'll just have to wait it out and see.

Depressing, sure, but we're small-time home growers and grow the berries for our own personal use.  I know of a blueberry farm up in Canada not too far from here and one about a hundred-plus miles south of us.  Their blueberry bushes are a cash crop for them, and I'd hate to think what would happen if they had to battle this fungus.
Posted by Mama Pea at 5/11/2019

Oh I do wish that there was a fungicide that could help you with your blueberry bushes.

since the blueberries love a more acidic soil, is there a possibility that you could surround the bushes with pine needles and have that kill the fungus? I am not aware of that fungus, so thanks for sharing this info. I will research that for sure.!

The Liberty Belle - Me, too! It's gonna be a wait and see situation before we can decide just what to do. I sure am hesitant to plant new bushes because those dratted balsam pine needles are all around us.

wyomingheart - The whole patch has always been mulched heavily with peat moss which adds acidity which the blueberries like. And it's the balsam pine needles that carry the fungus spores so I'd be afraid to rake up needles from the forest floor thinking that the balsam needles would be in the mulch.

Wow, Mama Pea, not good. So little is really known about plant diseases and how to cure them. I wish I had something encouraging to say!

Leigh - Thanks, Leigh. The fungus is supposedly rare and can affect both high bush and low bush blueberry bushes. We have a lot of wild low bush berries in the area along with balsam firs all over the place, but I've never heard of the wild bushes being affected. We can only hope this was/is a rare occurrence and it will disappear as mysteriously as it appeared. :o(

Wow Mamapea, that's a real bummer. Maybe replacing the removed bushes with a non American variety? Wondering if the cross pollination would give some resistance to the fir trees. Grow the bushes from seeds...I know, I know, it will take forever. But non North American blueberries are easier to find in the grocery store. Excellent video on how to do this on youtube.
Cockeyed Jo.

Cockeyed Jo - So appreciate your suggestions . . . and voicing of concerns over this dilemma! The funny thing is supposedly the balsam fir trees that are part of this cycle are supposed to have yellowed needles and we haven't found any evidence of this. We both love blueberries (plus they're so absolutely loaded with antioxidants!) and have always gotten bountiful crops from our bushes. If things continue to go the way it seems, we're really gonna miss having our own in our backyard. For possibly a few years anyway. :o(

One of those symbiotic relationships, in nature. You wonder just what the purpose of these, is...? Why was it necessary, for evolution, to produce these things? Something which allows the trees to prosper, but kills the blueberry bushes..?

Same question, could be asked, of Lyme Disease. What wonderful natural thing, does it produce, that it was allowed by evolution, to prosper?

All this 'wondering,' does nothing for your bushes. Or for the people who grow blueberries, as a cash crop..... -sigh-

Oh, and I imagine you have to burn, what you discard.

Never even heard of that disease. That's horrible. I'm at loss for words. Sorry!

wisps of words - Some people would say the cause is what we've done to our environment . . . caused Nature to be out of balance. If we weren't polluting soil and water, Nature wouldn't be able to create a weird fungus that would destroy.

Yes, we burned everything I trimmed or we dug out.

Lynne - The literature says it is rare. Maybe that's why it took me as long as it did to find info on it.

I'm really sorry to hear that, really the pits. But hoping you can salvage a good share of them. Are your blueberries from nursery stock or brought in from the wild? Do you think the wild ones would have an immunity? I know nothing about blueberries, except I love them on my oatmeal. Just a curious reader. Best of Luck! Phil

Phil - The bushes are from nursery stock, some are older than others. I don't know enough about it to say if the wild plants could have an immunity to the fungus. We've never been wild blueberry pickers, but many, many people around here are and if the wild bushes were infected, I pretty sure we would have heard of it. Thanks for the well wishes!

What a bummer. :-( Our bushes are all but dead; they have never thrived in their spot in our garden and we're not sure why. Fortunately there are plenty of you-pick places in the area from which we can fill our freezer.

We have problems with the elm here. They get fungus and spread it to the other fruit trees. I may have lost a peach tree, and the granny apple tree died. So frustrating.

Michelle - Is the soil acidic enough where your bushes are planted? They really need their soil to be acidic so that could be your problem. Or not.

Kristina - Doesn't it feel like we're beating our heads against a wall sometimes trying to grow our own food? Arrrrrgh.

I'm so sorry about your blueberries...that's terrible. And something that seems to have no apparent solution. That's one of the reasons I want a greenhouse in the future. Last year all of my tomatoes got some kind of fungal disease from pollen from trees too and nearly all were wasted. Sad stuff!

What??? I have never heard of such a thing - and crickey! I think I might have it, too! Now I will have to go home tonight (in the rain) and check out my tiny patch. Geezlouise, if it's not one thing, it's another.

Rain - I think we all have challenges with gardening when we try to do it without all the chemical poisonous sprays in wide use today. Not saying there's anything I could do about the blueberry bush fungus, but I wouldn't put any poisons in our soil. It will be interesting to see what kind of a crop we get this year. We may be counting the berries individually rather than by the gallon!

Susan - Oh, I hope you don't have it on your bushes! Are there balsam firs in your immediate area?

That's awful! You are a true detective! I wonder now that you know what it is if you can stay on top of it. Is there a way to propogate the bushes so you could always have more than enough in case some go 'south'?
Actually , the best idea is go to a blueberry farm...remember you were trying to 'balance' your life and tasks. I tried growing blueberries when I first cam here but it went the way of the rhubarb....

Supposedly, the blueberry variety named Rancocas resists witches’ broom. I have witches’ broom on blueberry plants and decided to try Rancocas. Too early to tell whether it will work.

If there's a fungus out there, my plants seem to get it, including witches brooms in my blueberries. We are surrounded by fir trees. Who knew? And who knew that the hawthorn trees I planted get a rust fungus from host plants cedar, juniper and apple trees? Likewise the Pagoda Dogwood-specific golden canker fungus that took that tree out. One has to be hardy to be a gardener and continually fight fungi, insects, rodents, damaging snow loads and the elements. You also have to be able to let go of beloved trees, many of which we planted in memoriam. It is truly a labor of love.