I'll admit it.  This post is being written because I don't want to sort through the mess on my desk, pay all those bills, gather my head together for the day, get myself out into the kitchen and whip up breakfast.  So there.

After breakfast, we're off to the wood pile again today.  As Papa Pea uses the chainsaw on more of the 8' long logs, I should be able to finish splitting all the kindling for which we have dried cedar slabs.  I don't think it will fill the kindling bin, but when we pull out the wood splitter, we'll make more from the big chunks of pine that were cut last fall.

It was only 21 degrees when we got up at six bells this morning.  Kinda chilly and frosty out there.  We also had a beautiful snow storm for about half an hour yesterday afternoon.  You know, those huge, giant snowflakes thickly falling while being blown sideways.  It covered the ground (even though the temp at the time was 36 degrees --- so why wasn't it raining?) but melted quickly as soon as the flakes stopped.  Today is forecast to be sunny and clear, but not what you'd call warm.

Our two Muskovy duck hens have kicked into egg-laying mode and we're now getting one or two duck eggs a day.  We don't want to hatch out any ducklings this year, but since they were both good at hatching out eggs last year, as soon as we get a little farther into the season (when the weather warms up), we'll put some chicken eggs under the ducks hoping that will replenish our chicken flock for next year.

Back when we were following a vegetarian diet, I frequently made Lentil Burgers.  I pulled the recipe out of my file box recently and made up a batch. 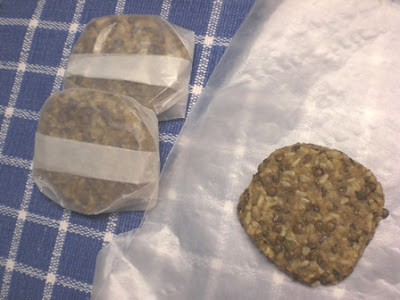 This is after forming, but before frying.

I had forgotten how good they are and both of us enjoyed the big patty we had on our plate Sunday night.  Okay, not exactly the same as a ground beef burger, but a darn good alternative to my mind.  Must make them more often.  Actually, I can conveniently serve them a couple more times as the recipe made six burgers and they do freeze well. 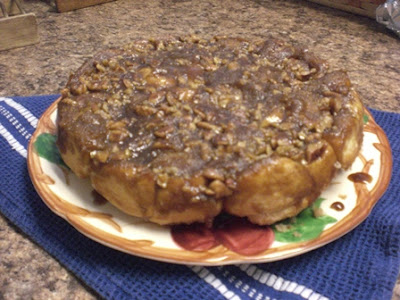 We've been avoiding desserts or sweets during the week but allow ourselves something on Sundays.  I've been making Caramel Rolls for our treat.  My recipe makes two cake pans full so I freeze one for the next week.  We both have a hard time not gobbling up both pans immediately.  (I do believe we could.)  Probably isn't so good to ingest that much of a sugar load.  We both drink milk with the rolls . . . so does that make it any better? 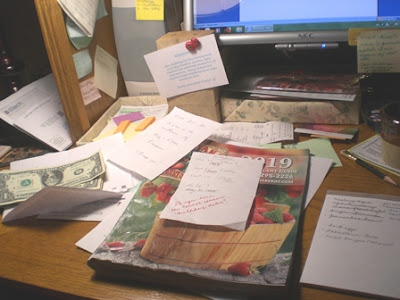 I would really like your lentil burger recipe! And there is no way two pans of caramel rolls would be safe around me....

I would really like your lentil burger recipe toooooo!!! We switched to a plant-based diet this past year and I am enjoying all the new-to-me flavors and tasty things to eat. And you procrastinate?!! Never!! You must be simply storing up the energy for the moment. :)

Lentil burgers... Interesting... But I don't think they'd go over too well here. He does like his burgers from happy cows.

Today is meatloaf, from happy cows. Great more than one meal dish.

Excellent idea, to freeze half of the "goodie," you make. I do envy those people, who can just-eat-a-piece of "goodies"! -sigh- Well, he can. But me, it just keeps "calling" to me. :-(

Me, three, on the lentil burger recipe! You and I are two of a kind. I can procrastinate with the best of them - and am very aware that I AM procrastinating. This does not stop me. I am really hoping that we are beyond our below-freezing nights. All I ask is that I can use the outside faucet!

Michelle - I thought the Lentil Burgers might temp your taste buds! You and my husband must share the same sweet tooth. If anything sweet is out on the counter, he cannot resist!

Lisa - I'd be interested in hearing your reasons for switching to the plant-based diet. And, yes, I'll post the lentil recipe asap. Regarding our foray into vegetarianism years ago, we had been leaning that way for a while and then did finally make the leap. My mom from Illinois hadn't been up for a visit since we were no longer eating meat, but came for a couple of weeks' visit shortly thereafter. About a week into her visit she commented, "Well, I knew your food would be different, but I didn't expect it to be so good!" :o}

wisps of words - Shhhhh, quiet on the meatloaf. With mashed taters and gravy, that's probably my husband's favorite meal! Very blustery and sunny here today, too. Yay (for the sun anyway), but then the breeze does help evaporate the snow.

Susan - Ah ye, that blessed day when we can safely turn on the outside faucet! Maybe in the north country that's the real signal of spring beginning?!

I am procrastinating by reading your post on procrastination. In fact I may just read it several times to be sure I am not missing anything.

I too would like your lentil burger recipe. I love black bean burgers and the original Veggie Burgers were the bomb. Then they went crazy trying to make a good thing better. Kinda overkill on their part. Even though I have returned to the land of animal products after many years of vegetation nation I do enjoy a wide variety of foods.

I just woke up one morning about 10 years ago and every cell in my body was screaming beef. I think that everyone has there reasons but I was always a lacto/ovo and simply stopped meat products. Multiple times in my life. If it were a save the cows type reason I would imagine it would be more difficult to go back. I would say that my diet is 80% grain or veggie just because I do. I have always tried to listen to my body and use moderation in all I consume.

So with that said I would love your recipe.

Goatldi - I think many of us think we're procrastinating when we're really just resting. Now, how's that for (faulty) rationalization?

When we were vegetarian, we were thinking it was healthier considering at that time we didn't have a source for organically raised meat. Plus we were living on a very limited budget (Ha, now there's an understatement!) and buying beans over meat was definitely cheaper! But we had our dairy goat herd at the time so had a lot of milk products.

Those lentil burgers sound good! I'll look on all recipes and try them. Healthy and inexpensive too....just so they taste good but I trust you. I could have eaten those caramel rolls too....but I'll pass on the milk....I hate milk....unless it;s chocolate but I love all other milk products..yogurt, cheese...all of it...just not milk.
My desk is always a mess so tell me about it. Yours looks neat compared to mine. Is that a seed catalog peeking out?

Well, I hated to bother you for the recipe but since everyone else is asking I'll throw my hat in too. I'd rather have yours that you attest to. Thanks ahead of time.

See there Mama Pea . . . no procrastinating on the recipe!

I haven't made lentil burgers in a long long time. Thanks for the reminder. I wonder how close my recipe is to yours. Do you use red lentils or green? Great idea to freeze before cooking too. This would come in handy for my vegetarian daughter too. And full of healthy goodness for the rest of us.

I am a sugar-holic! I can not resist! If they are around, they call my name! I just don't have much of any sweets in the house. I do keep some sugar free chocolate on hand for when I get the urge! It's really great to limit that sugar intake to one day a week! Good for you and Papa Pea!

I want both reipes!! Cockeyed Jo

Sam I Am - The catalog was Indiana Berry Farm. That's where I order all my strawberry plants. Last year I finally pulled out all the Earliglow variety because they only produced 1/3 as many berries as the Cavendish. (For three years in a row!) So I ordered more Cavendish to replace those I pulled out.

Lentil Burger recipe coming. I had a not-so-profitable day and couldn't get to it.

Phil - I froze the second pan on Sunday and my husband has been hinting I take it our of the freezer ever since. I'm holding firm though!

wyomingheart - I won't deny that we sometimes sneak in a wee taste of something else sweet between Sundays. My sugar-holic (like you) husband does anyway, but it's usually dried fruit. Could be worse!

Cockeyed Jo - Recipe coming! Ever have one of those days that everything you touched went wrong? That was me all day long. :o\