Once again it's time for me to post a first-of-the-month photo of my raised beds to show the garden's growth as compared to previous months.  Once again this comparison post will be delayed because today we're having a steady rainfall interspersed with periods of heavy fog.  Getting a good picture isn't going to happen today.

Currently it's raining and blowing so hard that I'm not going to venture out on the deck to check our rain gauge, but peering at it through a window, I'm guessing it has a bit over 1-1/2" which has fallen since the rain started early this morning.  The outside temp is at 63 degrees so it's feeling a little cool and damp . . . even inside, but of course that's what they made zip-up sweatshirts for. 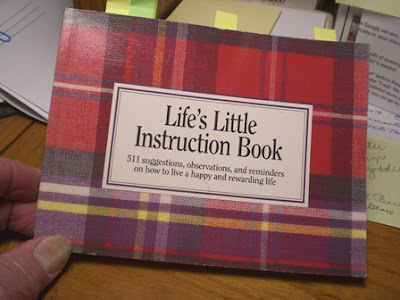 Have you seen this little book?  The small print under the title is:  511 suggestions, observations, and reminders on how to live a happy and rewarding life.  Some good stuff in here, folks.  The mostly one sentence notations are numbered 1 through 511, and nearly all of them are thought provoking.

The one I'm currently thinking about is number 107:


Smile a lot.
It costs nothing and is beyond price.

I don't know a single person who doesn't look better when they smile.  Not one.  Often times when I'm smiling about something, my husband says, "You're so pretty when you smile."  (He may or may not have had his glasses on at these times.)

As a young adult attending a family funeral, my mom re-introduced me to two elderly, distant relatives I rarely saw.  One of the ladies said, "Of course I remember you, you've always had that lovely smile."

Hunh.  And here I'd always thought my teeth were too big and stuck out when I smiled.  I'm thinking this person didn't see my teeth but perhaps the effect a smile had on my whole personality.  (Or she may not have had her glasses on either.)

I was at our recycling center a year or so ago when I spotted a man taking items out of his truck.  The lettering on his truck identified him as a very gifted photographer in our area whose work I had admired, but whom I'd never seen in person.

He had the most awful scowl on his face and gave off the sense of being very unhappy.  Maybe he was.  Or maybe he simply didn't realize the unpleasant vibes his facial expression was giving off.  How drastically different he would have looked if he had been smiling.  And how different my impression of him would have been if he'd had a smile on his face!

Even when we're feeling like the last thing we want to do is smile, doing so can literally change our emotions from down-in-the-dumps to something that feels so much better.

I know when I'm thinking (ouch), I tend to frown without even realizing I'm doing so.  I need to have number 107 from Life's Little Instruction Book imprinted on my brain and remember that everyone does look better when they smile.  Plus, you just might have a beneficial effect on others around you!
Posted by Mama Pea at 7/01/2018

Yep, all that is very true about smiling. Furthermore, it can make people wonder what you're up to, so is even appropriate around your "enemies"! ha

Good advice. "They" say that even if you don't feel particularly happy, by smiling you can 'trick' your mind into feeling happier. Unfortunately, I don't have a smiley resting face, so I can come across as a bit aloof, when I'm not at all.

I hope your weather clears up. At least you're getting some rain?? -Jenn

Great reminder!! Wish we had some of your cooler temps and steady rain. :)

Completely true and so easy! I don't know about you, but I know I tend to frown more than I smile. Something to work towards! P.S. Please send a) your rain and b) your cool temps. Thank you... xoxoxo

I try to keep at least the hint of a smile on my face.

What happens is, when we don't think about our face, it can go into some awful expressions. Betcha' the man, was simply reacting to the not fun job of going to the recycling center. And perhaps, he wasn't really grumpy at all. Maybe...

Good advice, to remember to smile. Like you said, every one looks better when they do.

Being old, if I see someone with pretty hair, or a pretty skirt or something, I say that to them. It's so interesting to see their face go, from no smile, to a smile. Everyone likes a compliment. It's the nicest way, to bring a smile.

And how sweet, that Papa Pea says you are so pretty when you smile!!!!! That is enough, to remember to smile, around him!!!!

Strangely, I was just watching some clips on YouTube and one of the main things that Europeans did not like about Americans was that we smile too much. They felt it was a false friendliness. Maybe they have a different book of instructions? haha

I agree 100% with about smiles!! If you give them out, you're sure to get them back. And I love that little book. For years a copy has rotated on and off my desk at the day job along with an array of other amusements as something for visitors to enjoy. Hasn't been out for awhile, maybe its time to rotate it on again.

I know how I feel about approaching a salesperson with a sour face so try to always smile at my customers. I think it helps me keep a positive attitude about the work.

Jenn - I, too, have been accused of being aloof or standoffish so I think that's why I've become very conscious about smiling as often as I can without it being "fake." We just prove the addage that you can't tell a book by its cover!! ;o)

Lisa - Mailing you cooler temps and rain tomorrow! Hee-hee. Wish I could!

Susan - Sending your package of rain and cooler temps tomorrow when I mail Lisa's! I know you've had terrible heat and humidity. Makes the corn grow and people melt. Ugh.

wisps of words - Yes, so wise of you to bring up complimenting people when a compliment is due.

About ten years ago (maybe more) when I wasn't as old as I am now (!), I was walking in a mall behind an older lady who had on a nice skirt, panty hose and pumps with about 2" heels. She looked very attractive and when I came up even with her and started to speak she was a little taken back and didn't know why I (a complete stranger) was stopping her. I told her she had very, very nice legs and looked so attractive. She said, "Why, I'm 83 years old and I never thought I'd get a compliment like that!" I could tell it meant a lot to her and I was so glad I had made the effort to speak to her. Thank you for reminding me that it often means a lot for anyone to receive an honest compliment.

StrictlyMystic - Well, that's a different take on it, isn't it? I've always heard that we Americans come across as unfriendly and aloof. Perhaps they did have a different book!! ;o)

Mark - There's something about smiling at a person that 9 times out of 10 makes them smile back. Even if it's with a quizzical look on their face that indicates they're wondering what you're up to!

tpals - Definitely! There used to be a family-owned hardware store in our little town. The father was semi-retired and the son was the one that was most often in the store. He was not happy with his lot in life and I used to make it a game to see if I could make him smile when I went in the store. (I wasn't very successful!)

What a great post. Something seemingly so small as a smile can make a huge difference. Every time I seem someone who looks like their scowling I smile at them if I catch their eye. Almost 100% of the time they immediately smile back! It's made me realize how easy it is to think negatively of a person just because of the setting on their face. Or maybe they just needed someone to send a little friendliness their way. That book sounds like a treasure.

Leigh - To my mind, giving someone a smile is sharing kindness, caring and, in a way, a compliment. Almost like seeing them, even though they may be a stranger, makes you feel good. As my little book says, what does it cost you to send someone a smile?