A couple of years ago I saw a wooden sign in a gift catalog that I really wanted to have to hang in our bathroom.  But being rather frugal (ahem), I thought the price asked was too much.

I kept thinking about the sign and even searched online for one like it more than once.  No luck.

A week or so ago I decided I could make the sign as a small quilted wall hanging.  And so I did. 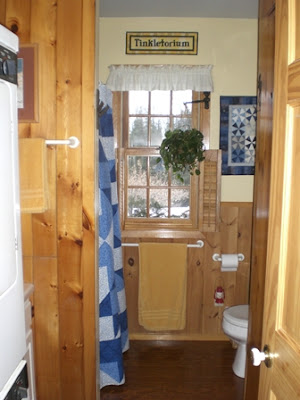 Here it is in place over the window at the far end of our long, narrow, small bathroom.

Since most of you won't have a chance to enter our bathroom and get close enough to read what it says . . . 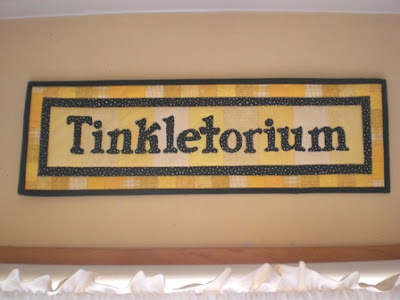 I don't care what anybody else in my family says (and they have not all been complimentary . . . just no sense of humor), I love it.

Since we're talking bathrooms, I want to share a little story with you.

Papa Pea and I have been known to bemoan the fact that we have only one bathroom in our house which is kinda sorta unusual these days.  Every time we think having that second bathroom would be very convenient, I think back to my grandma and grandpa and how they managed to survive while raising seven children . . . with only one bathroom.

Actually, in their first home the bathroom was that little house in the back yard known as an outhouse.  Years later while their kids were still all home, they did get "modernized" and gained an indoor bathroom.

Their situation changed and they moved to a new location, a new (to them) house, but still containing only one bathroom.

In the early l940s, some of their kids had grown and left home, but Grandma and Grandpa and three of their daughters still lived under the one roof.  World War II was in full swing, my dad was shipped overseas so my mom (who was pregnant with me) moved back in with her parents.  Shortly thereafter, the husband of one of Mom's older sisters was sent overseas so she and her infant son moved in with the rest of us.

This meant that the members of the household were then Grandma and Grandpa, their youngest daughter still in high school, two other daughters who had graduated and joined the work force, my mom and me and another daughter with her infant son.  That adds up to seven adults and two babies.  Yep, all of us and only one bathroom.  (Plus, no hot water.  All water for dishes, laundry, filling the bath tub, etc. had to be heated on the kitchen stove.)

So when Papa Pea and I think we suffer any kind of hardship (puleeze!) because we have just one bathroom for the two of us, it brings me up short, and I realize we have it pretty good, don't you think?

And you make this yourself??? So cute!

Yes, the way people have lived, compared with how people think they "have to" live, today. Pretty amazing.

Your war time story, complete with no hot water, takes the cake though.

Today, seems as if every member of a household just "has" to have their own bathroom! Or nearly so. It boggles my mind, how people act, on some of those "looking for a home" tv shows.

Our house has a real bathroom, upstairs, and a "powder room" down. "P.R." meant a tiny little room with toilet/sink. -grin-

We raised 3 children, with only that one bathroom. And it worked. Today, imagine a house, with 3 teens and 2 adults, with one shower?!?! ,-)

Yes, it is good to remember just how spoiled most of us are now in SO many ways! Thanks for sharing your story AND your adorable quilt-sign!

My house still only has one bathroom (and I like your sign). Growing up we never had a shower, only the tub, which was handy because it took me a few years to upgrade my current bathroom to include a shower.

I still get shocked reactions when 'normal' people learn I don't own a dryer or dishwasher. Lol

Mama Pea "it's your sign!" And it is very nicely done . Poop I say on the naysayers I love it!
We didn't have more than one bathroom until the kids (the two legged) were 8 and 11 years that is. Managed nicely.

I often forget how easy I have it. When my grandparents lived in this house, I remember there was cold water only, an outhouse, and chamberpots in the stair landing. Uffda, that was something to wake up to. But they had no complaints. I like your tinkletorium.

I dream of the day when my kids move out or we move to a two bathroom house. We have four adults in a one bathroom house and I fear the day any kind of illness that makes more than one of us sick at the same time hits. So far it's only happened a couple of times when my kids were small and the mess was minimal plus buckets but adults are not going to want to use a bucket cause someone is in the shower. There shouldn't be one toilet houses as far as I'm concerned unless it's a one person home.

wisps of words - Yes, "tinkle" was the word I grew up with! Also, we never had a bath tub, only a shower. And, ya know what? That's all we could squeeze into our tiny bathroom in our house here! (It gets us squeaky clean nonetheless!)

Michelle - Thanks! There is a current generation out there today that have no idea what it is to "make do." That's why it's so important for all of us to be appreciative and grateful for all the conveniences we do have. :o}

tpals - We don't have a dishwasher either. I do have a gas dryer, but love to hang clothes out on my handy clothesline. Trouble is for about six months of the year up here in northern Minnesota, I risk frost bite trying to hang clothes outside. We did live for a long time without a clothes dryer, though, and I dried the laundry inside on two big folding racks and hanging on hangers. (I still have the racks . . . just in case.)

Goatldi - I think folks of our generation know how to live comfortably without all of what is perceived as "necessary" conveniences. Also, younger people who are being conscious of living more sensibly know how to function very well without over-indulgence.

Phil - Thanks! Our grandparents didn't complain because they had no other choice! When we first moved up here, we lived for years with an outhouse and "pot" for middle of the night. Had no electricity or running water either. And we survived. It was more work, but we managed to do it while keeping all neat, clean and sanitary. So it can be done!

Sparkless - Well, that's just it. If you have one fully equipped bathroom, all you need for a second one would be a "powder room" as someone above mentioned. Just having a small room with toilet and sink . . . that would be perfect.

We raised 5 kids in 3 bedrooms , 1 bath house. They learned to share and be respectful. I think it would be nice to have another bathroom but the last is in college 9 months a year so its only us 2 left to use it daily. Besides you have to clean another bathroom.

Lisa - Oh, that was another point I was going to make . . . having only one bathroom to clean is great! That's a task that no one wants to do more than they have to!

Phil - Yes, most of us here in this country can't fathom the way in which other people are forced to live. Good point.

Hee hee...love the Tinkletorium!!! Very cute! I guess we've been spoiled too. The last two rentals, we've had a full bathroom and a wc. It's very convenient, but not necessary. When we first started talking about our dream home, it HAD to have 2 bathrooms. But you know, we realized it's excessive. One will suffice and we'll get used to that again!

Rain - When we really think about it, there have been very few times when it was inconvenient to have just the one bathroom. Very few!

Thanks, Sherry. You have a good sense of humor! :o)